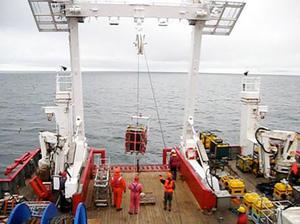 Up in the Artic, at this time of the year, there are still 24 hours of light. It is such a weird sensation arriving to your cabin at 4 am (after some hours looking at seismic lines, maps of the seafloor, and images of bubble plumes) and having to close the window blind!

Then, after a swaying sleep, a fusion of a blue-grey sky and the ocean covers you again. However, seems that the night is silently arriving.

After a long session of use, SYSIF (our towed sonar system) deserves to take a rest. Now, it is the moment for the deployment of the OBS (a seafloor vibrations detector) with our submarine robot HYBIS. For the first time HYBIS is used to deploy an OBS and everyone is quite excited to see how it does the job... The deployment of the OBS was brilliant!! HYBIS passed the test!! During its descent a few shrimps are shown on the displays. Curiously, for lunch we had prawn cocktail as a starter. Do you see the connection?