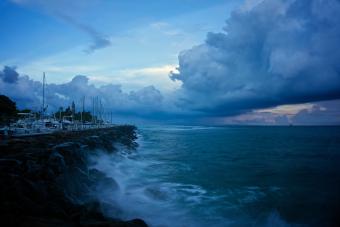 Professor Kevin Horsburgh from the NOC said, “The worst case of coastal flooding in the UK in the last 100 years was in 1953, where 307 people were killed. Since tide gauge records are not very long, there isn’t a consistent record that could tell us whether this storm was one we might experience every 50 years or every 500 years. This project will draw on the world class expertise in coastal flooding at the NOC to help address the problem of estimating the probability of such an event happening again, or of a worse event occurring in our life time.

Alongside the NOC, The Universities of Southampton and Reading, and the Met Office will work together to use these ‘virtual storms’ to create data that will fill in the gaps in the storm surge and wave record – and therefore improve our confidence in our statistics of coastal flood risk.

Associate Professor Ivan Haigh, a co-investigator for this project from The University of Southampton, pointed out why the outcomes of this could be particularly important for communities along the UK’s South Coast “There have been a number of significant coastal flooding events over the last two decades. For example coastal flooding in the Solent region has occurred more than six times in the last 20 years.

In fact, after London and Hull, Portsmouth is the city most at risk from coast flooding in the UK. The Eastern Solent Coastal Partnership are planning up to 100 million pounds of coastal defence schemes in the next decade, this project could help better inform defences, such as these, to ensure they are able to protect communities from worst-case flooding scenarios.”

This project is funded by the Natural Environmental Research Council (NERC) and forms part of the NOC’s on-going commitment to produce world-class science with a social and economic impact.