Coral reefs may be at risk from Sanchi oil tanker contamination 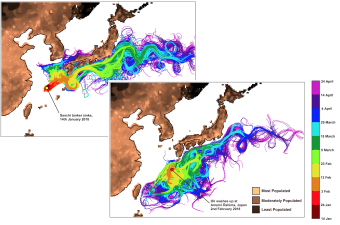 Water polluted by the Sanchi oil tanker may reach coral reefs in the Ryukyu Island chain, according to the latest ocean model simulation by scientists from the National Oceanography Centre (NOC) and the University of Southampton, using the leading edge, high-resolution global ocean circulation model, NEMO.

These latest predictions have been made possible following new information about the suspected arrival of some of the oil from the Sanchi oil tanker at Amami-Oshima, an island at the edge of the East China Sea. This arrival underscores the critical importance of international monitoring to understand the spill, and reduce the uncertainty on its fate and ultimate impact on the region.

Previously, simulations by the same team of scientists were based on the Sanchi oil tanker’s final resting site, and found the proximity of the oil to the major Kuroshio Current significantly increased the potential area affected by the spill, including the Greater Tokyo Area hundreds of miles away. They also predicted that the island of Amami-Oshima, home to 73,000 people as well as coral reefs, would be threatened by oil contamination approximately 20-30 days after the Sanchi sank. Now, after only 20 days, oil contamination has reached the island and prompted these revised projections.

While these new simulations focus only on the fraction of the pollution that has reached Amami-Oshima, they find that refining the pathway of the spill actually extends the potential region of impacts. Previously only regions to the north and east of the Sanchi wreck were predicted to be affected, but these latest simulations point towards impacts on the Ryukyu Island chain to the south and west, with a small risk of contamination reaching the vicinity of Taiwan.

Leading this research, Dr Katya Popova from the NOC said: “Contamination from oil spills can have a devastating effect on coastal communities and marine habitats, such as the coral reefs of Amami-Oshima. By reducing uncertainty around the fate of this oil contamination, our ocean modelling simulations have the potential to inform efforts to reduce further impacts from the spill. Furthermore, because currents are chaotic like the weather, it is important to constantly monitor oil spills so that simulations can be updated, as here.”

Stephen Kelly, the University of Southampton PhD student who ran the model simulations, said: “Since these new results are based on only a small part of the region that our previous model projections predicted would be affected, I am concerned that the spread of pollution may actually be more extensive and complex than we previously thought.”

The team of scientists involved in this study ‘dropped’ virtual oil particles into the NEMO ocean model and tracked where they ended up over a three-month period. Simulations were run for a series of scenarios of ocean circulation typical for the area the oil spill occurred in, and for this time of year. This allowed the scientists to produce a map of the potential extent of the oil spill, showing the risk of oil pollutants reaching a particular part of the ocean.

NOC scientist, Dr Andrew Yool, who collaborated in this study, added: “By including this one new spill location, we’ve found an additional region to be potentially at risk, but information on the fate of the spill has been limited and we might be missing further areas. So a large-scale monitoring effort is critical if the impact of the spill is to be properly understood.” 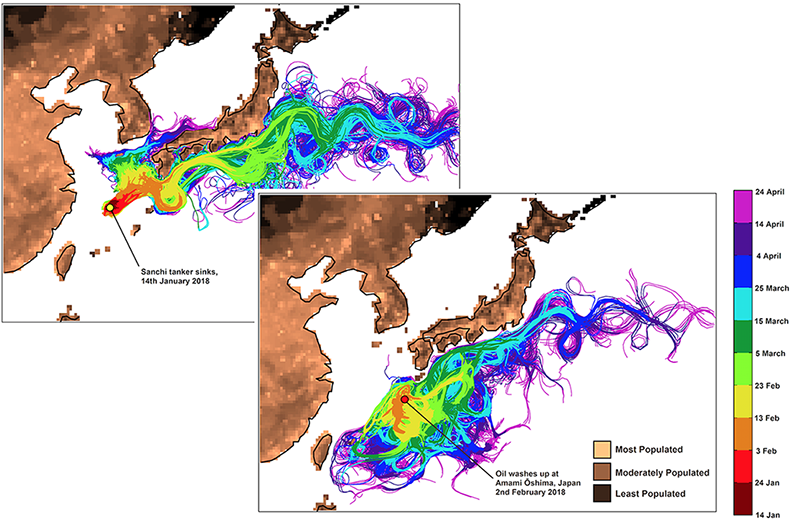 To read more about previous ocean model projections for the spread of oil contamination from the Sanchi tanker, please follow the links below: