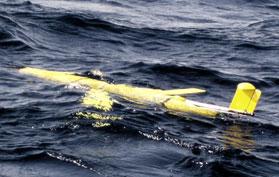 A project to develop ocean-going robotic vehicles that will carry out sustained marine research over long periods has awarded contracts to five leading-edge technology companies under the Government-backed Small Business Research Initiative (SBRI).

The SBRI competition has awarded the five three-month, first-phase contracts to assess the viability of rugged, robust and reliable long-endurance marine unmanned surface vehicles. The vehicles, which are similar to marine gliders, but which do not operate at depth, will gather data from the ocean over periods of several months in support of UK marine scientific research.

The project brief highlights the fact that a wide range of sensors now exists to take measurements on the ocean surface, that satellite navigation tools and communications for command and control, and for data transfer to shore, are readily available, and that there are a number of feasible technologies available to provide the energy necessary for long deployment.

The successful companies are: MOST Ltd; Blue Bear Ltd; the University of Aberystwyth, Intrepid Minds Limited and ASV Ltd.

The tendering process was coordinated by the Marine Autonomous and Robotics Systems (MARS) facility based at the National Oceanography Centre (NOC) in Southampton, on behalf of the Natural Environment Research Council (NERC), the Defence Science and Technology Laboratory and the Technology Strategy Board (TSB).

The year-long second phase of the Long Endurance Marine Unmanned Surface Vehicles. project will develop prototypes. To demonstrate capability and impact these would be used alongside already‐funded research projects such as the FASTNEt (Fluxes Across Sloping Topography of the North East Atlantic) which was developed in response to a call for proposals to deliver the NERC Ocean Shelf Edge Exchange Research Programme.

Geraint West, Head of National Marine Facilities Sea Systems at NOC, said:  “Technological innovation is central to NOC’s recognition as a world-leader in using autonomous technologies for sustained observation of our oceans.  We are delighted to be working with these innovative UK companies and the TSB to develop the next generation of vehicles that promise to take forward our vision in this exciting field.”

The SBRI programme, which is championed by the Technology Strategy Board, the UK’s innovation agency, is designed to use the power of government procurement to drive innovation. It provides opportunities for innovative companies to engage with the public sector to solve specific problems. Competitions for new technologies and ideas are run on specific topics and aim to engage a broad range of organisations. SBRI enables the public sector to engage with industry during the early stages of development, supporting projects through the stages of feasibility and prototyping.

Stephen Browning, Head of SBRI at the Technology Strategy Board, said “It is really exciting to see the proven SBRI mechanism now helping to stimulate engagement between the National Oceanography Centre and these five companies to deliver innovation in this area. We congratulate all the companies on their contract awards and wish them every success.”