The challenges of tsunami risk assessment 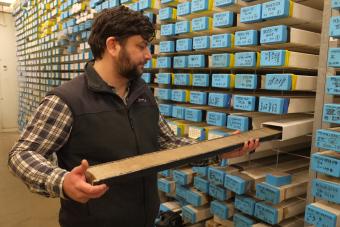 At a global scale, tsunamis are relatively infrequent when compared with hurricanes or storm surges, but they are among our most destructive and deadly natural disasters, and their impact will become greater as human populations continue to rise substantially in coastal cities.

As part of World Tsunami Awareness Day 2019, on the 5 November, the UN has designated a focus on reducing disaster damage to critical infrastructure and disruption to basic services from tsunamis.

Despite the devastating impact of tsunamis on their victims, their relative scarcity can lead to false perception of low risk. Indeed, the relatively infrequent nature of tsunamis poses several challenges to hazard assessment, including insufficient data to conduct meaningful statistical analysis of tsunami occurrence through time – exacerbated by the difficulty of detecting past tsunamis in the geological record. This lack of data means that tsunami statistics are vulnerable to being skewed – the risk may appear too high in areas that have recently experienced a tsunami, and too low in areas that have not experienced one within the reporting period.

Furthermore, a variety of geological processes (sometimes working in combination) can trigger tsunamis, which complicates attempts to assess tsunami risk based upon statistical analysis of trigger mechanisms. Tsunamis are typically triggered by underwater earthquakes, landslides and volcanic eruptions, with additional triggers including meteorite impacts and extreme weather systems (generating meteo-tsunamis). This presents a further challenge to attempts to undertake consistent global-scale analysis of tsunami hazards.

Consequently, it is often better to consider tsunami risk on a case-by-case basis. For example, the recent Sunda Straits tsunami in 2018 was generated by a landslide on a volcanic island. This area had also been affected by the 2004 Boxing Day tsunami, generated by a megathrust earthquake. These are two very different mechanisms that would require separate consideration when assessing the vulnerability of the coastlines in that part of Indonesia.

To address these challenges, NOC scientists and engineers are installing and maintaining tsunami-capable monitoring systems, both in the UK and overseas, as well as identifying tsunami and meteo-tsunami events from tide gauge records and core logs. In addition, NOC scientists and collaborators are modeling the impacts of tsunamis of various origins. Finally, NOC provide data and advice to relevant authorities responsible for mitigating tsunami hazards to the public, which in the UK is the Natural Hazards Partnership that forms part of the Cabinet Office Civil Contingencies Secretariat.