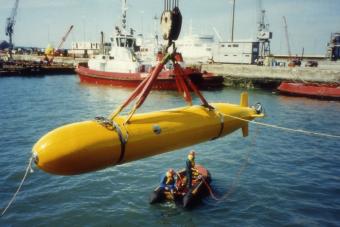 With the latest trials of the National Oceanography Centre’s (NOC) Oceanids Programme falling on the 25th anniversary of the NOC’s first Autonomous Underwater Vehicle (AUV), we look back to that first Autosub-1 mission, and how it paved the way to the innovative AUV operations and developments undertaken by the NOC team today. 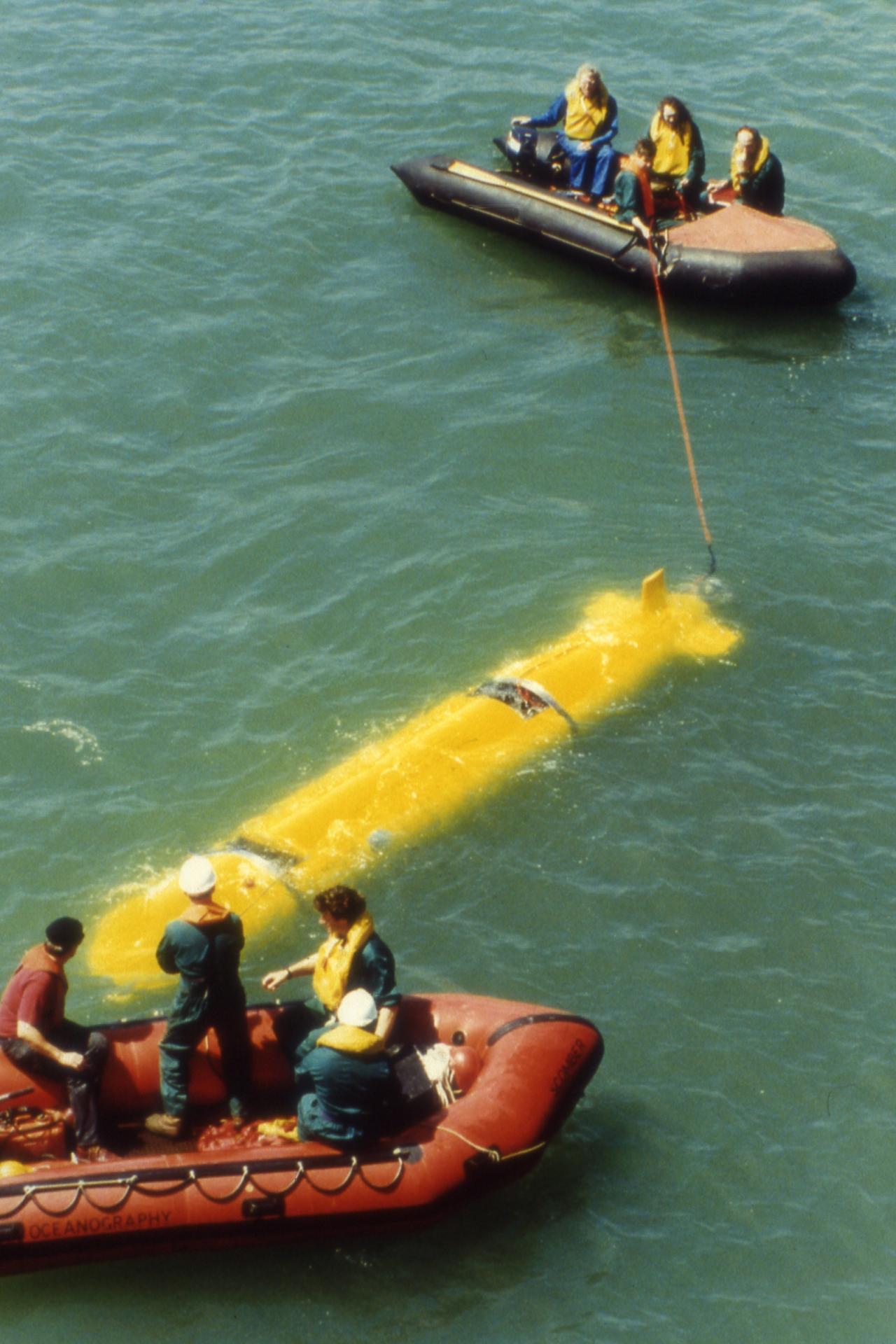 The first of the trails lasted five minutes as planned by the team, with Autosub-1 diving to 3 metres and maintaining depth to half a metre. Mission 10 was the first trial with Autosub-1 in autonomous mode, which was successful.

On 18 July 1996, two days into the mission, the team hosted a VIP day, showcasing the teams incredible progress, and the vehicle's autonomous capabilities. With very light winds from the South East the visitors on board the support catamaran Top Cat witnessed three missions, the logbook for the first noting, "Mission Executed with no problems". The final two mission of the Autosub-1 trials of 25 years ago demonstrated GPS acquisition and navigation between waypoints.

Any issues detected during the trials were attended to in further trials the following month in Empress Dock and back at Portland Harbour in the autumn. A year later the team and Autosub-1 were gathering oceanographic data off the Florida coast, and the following year off Bermuda.

Reflecting on the 25th anniversary of the first NOC AUV mission, Gwyn Griffiths, Head of the NOC’s Ocean Technology Division at the time of the trials said: “The late Nick Millard and the small Autosub team were at the forefront of establishing the scientific and technical credibility of autonomous underwater vehicles 25 years ago, thereby laying firm foundations for the MARS of today”

The NOC’s AUV innovation of today

In the present day, the NOC’s MARS team continue to push the limits on how we can explore our oceans, by operating and developing systems allowing us to reach new depths, travel under ice, take readings in remote areas and collect data during high sea states.

AUVs in development: The Oceanids Programme 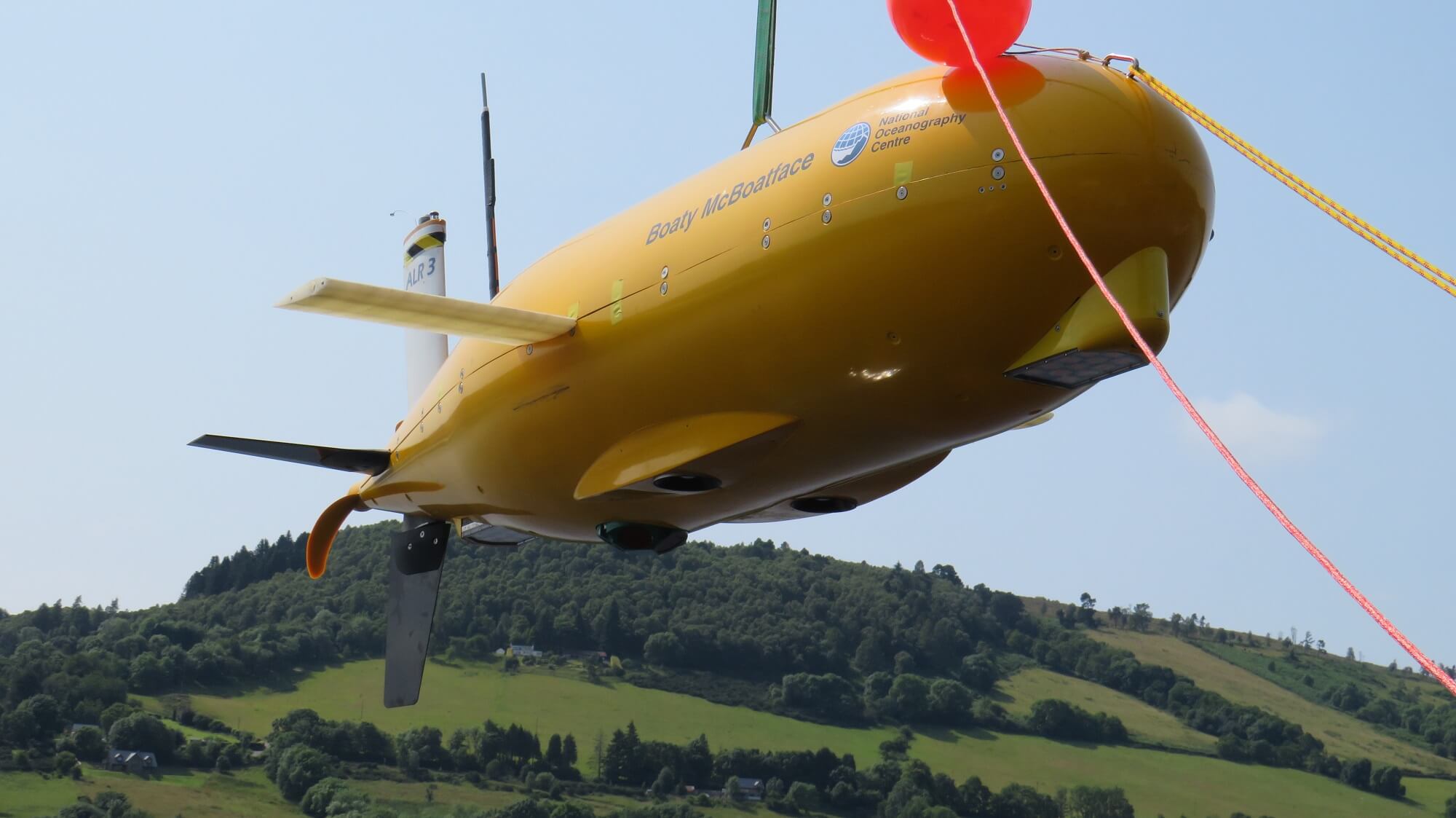 The NOC coordinated Oceanids Programme, which is funded by the UK Government through the Industrial Strategy Challenge Fund (ISCF), aims to develop enhanced capability for the UK marine science community, particularly in unexplored and technologically challenging under-ice and deep-ocean environments.

The programme will deliver two new AUV classes: three Autosub Long Range vehicles (ALR1500) that will have longer endurance and greater payload capacity compared to the current vehicles; an Autosub, capable of carrying high-power sensors and operating under ice (Autosub2KUI). The project will also deliver enhanced ‘command-and-control’ (C2) systems for more efficient MAS fleet management, and a range of innovative new sensors to maximise science output from the new platforms.

The NOC’s MARS team recently attended trials at Loch Ness, coinciding with the 25th anniversary of the first Autosub-1 trial. A series of sea trials will follow, ensuring the new capabilities are ready for scientific deployments anywhere in the ocean.

AUVs in action: The iMiribilis2 expedition 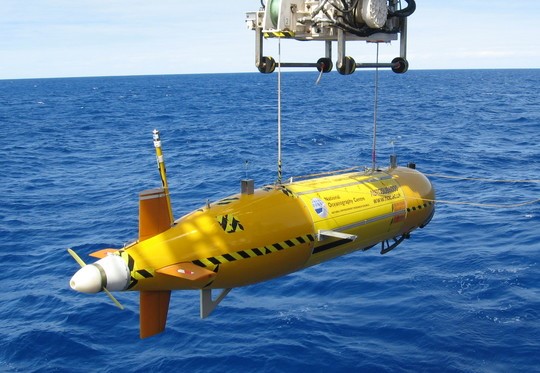 The NOC’s Autosub6000 was developed by the team as a successor to Autosub-3 enabling operation in the extreme pressures seen in the deep ocean. It uses innovative batteries which can withstand the huge pressures at 6000m depth, unlike its predecessor Autosub-3, which relied on strong pressure vessels.

Since its first sea trials in 2007, Autosub6000 has continued to be developed, undertaking its first science missions in 2008. Most recently, scientists and engineers from the NOC have joined the collaborative iMiribilis2 expedition, adapting and operating the Autosub6000 to investigate the ecosystems and natural processes in the deep sea around the Cabo Verde islands. The Autosub6000 will be mapping areas of the seafloor using sonar and photography as well as sampling environmental DNA using a cutting edge instrument developed by sensor engineers at the NOC.

Dr Maaten Furlong, Head of Marine Autonomous and Robotics Systems at the NOC, said: “The current success of the MARS operational and development programmes build on the innovative work undertaken by the original pioneering Autosub team. Their work provides the foundation for MARS and we continue to build on their successes. The new team of engineers continue to strive for excellence as we work with the science community pushing the limits of what is possible in our collective goal to explore and understand the world’s oceans.”