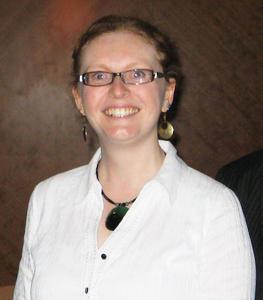 Congratulations to Dr Stephanie Henson who has been awarded the Arne Richter Award for Outstanding Young Scientists of the European Geosciences Union.

Stephanie will be presented with the award next April during the 2012 General Assembly of the Union in Vienna, Austria. Stephanie has also been invited to present a Medal Lecture at the General Assembly, which is usually well attended, particularly by younger scientists.

This is a major achievement for a young scientist and an indication of the high calibre of her work.

Stephanie researches into the factors that influence and regulate the ocean’s biology and, through this, its carbon cycle.

Beginning during her original doctoral studies, Stephanie’s work has largely addressed questions of variability in marine ecosystems by using remote sensing. Although remote sensing gives only information about the first few metres of the ocean Stephanie has used it to tease out deeper biogeochemical truths. She has explored nutrient dynamics, bloom timing, phytoplankton dominance, and export production.

In a recent paper she applied her expertise with remote sensing techniques to define when the effects of climate change may be separated from background variability. As well as dealing with topics of pivotal contemporary importance, her work successfully challenged the conclusions of earlier, high-profile research, and clearly demonstrated Stephanie’s scientific leadership.

Stephanie’s nomination for the prize noted that, “Since completing her PhD only six years ago she has become an outstanding young scientist working at the leading edge of marine biogeochemical research. She has led international groups of fellow researchers, is an enthusiastic teacher and a lead-supervisor of doctoral students, and a sea-going scientist.

“Stephanie is producing results that cut to the heart of our understanding of how, and when, anthropogenic effects will perturb the Earth system.”