30 years of measuring sea level in the South Atlantic 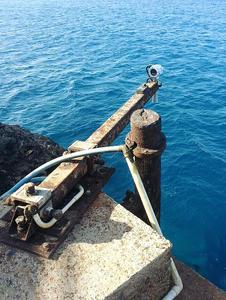 Measurements of global and regional sea level will soon include changes due to land movement in the South Atlantic.

The South Atlantic Tide Gauge Network, which is operated by the National Oceanography Centre (NOC), has been measuring sea levels in some of the remotest places on Earth for 30 years, including open ocean islands such as Ascension island, and the hostile Antarctic environments of Rothera and Vernadsky. Prior to the installation of this network there was a lack of information on sea level variations in the Southern Atlantic and a bias in tide gauge records towards the more densely-populated Northern hemisphere. Over the last three decades, data from the South Atlantic gauges have improved estimates of global sea level change, such as those reported by the Intergovernmental Panel on Climate Change (IPCC).

This year the Natural Environmental Research Council (NERC) has provided funding for the NOC to upgrade this network with customised radar gauges and Global Positioning System (GPS) sensors. The GPS sensors will allow scientists to distinguish changes in absolute sea level from changes in land level, both of which are contained in tide gauge records. Vertical land movement can be caused by sediment compaction, groundwater extraction, glacial rebound or tectonic processes.

Professor Kevin Horsburgh, Head of Marine Physics and Ocean Climate research at the NOC, said “We know from satellite measurements that the global average sea level is rising at about 3mm per year but there is enormous variability from one place to another. There is a need for more accurate estimates at the regional scale and it is essential to measure vertical land movement. Installing GPS technology on our South Atlantic network is a big step towards understanding regional sea level changes in the Southern hemisphere”.

The network has already allowed scientists to monitor year-to-year fluctuations in the world’s largest ocean current – the Antarctic Circumpolar Current or ACC. The ACC connects all of the major ocean basins and redistributes heat, freshwater, and nutrients around the global ocean.

Decadal and longer-term sea level variability in this region is less clearly understood. Dr Angela Hibbert from the NOC, and the Scientific leader of the South Atlantic Tide Gauge Network, explained why long-term monitoring of the ocean is important, “Thirty years on, and this data set is just starting to yield interesting results. Since changes in global sea level occur on decadal and longer timescales the network will not reveal information on all these changes until the dataset is about fifty years old.”