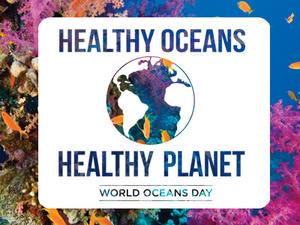 The oceans already provide valuable food resources and have the potential to yield so much more...

The global ocean is the largest and most valuable ecosystem on the planet, and as world population is set to grow to 9 billion by 2050, attention will turn to the ocean for vital resources – food, energy and minerals. Can the oceans meet this demand and survive the impact of pollution and climate change?

Research at the UK’s National Oceanography Centre is already revealing the oceans’ role in weather, climate and catastrophic events such as hurricanes, drought and flooding. Executive Director of the UK’s National Oceanography Centre, Professor Ed Hill said “The theme of this year’s World Oceans Day is ‘Healthy Oceans, Healthy Planet’. The oceans already provide valuable food resources and have the potential to yield so much more. We harvest energy from the sea – oil, gas and, increasingly, wave energy. Rare mineral deposits such as manganese, essential in so much of modern technology, are now being mined. But care needs to be taken to ensure that these activities do not recklessly destroy important habitats.

“With the advent of large-scale monitoring we are beginning to better understand the role of the oceans in weather and climate. We now know that the oceans are mitigating the effects of global warming by absorbing heat and greenhouse gasses. We also know that increased ocean temperatures are resulting in more hurricanes like the devastating Hurricane Katrina. Arrays of instruments in the Atlantic are showing links between the strength of the overturning currents and coastal flooding in America, and drought in Africa.”

Professor Ian Wright, Director of Science and Technology at the National Oceanography Centre added “This science increases our understanding of the planet and has clear applications to human concerns of safety and sustainable resources. Oceanography is like space exploration – it is big science demanding large research infrastructure, innovative technology and international cooperation. “But we are making progress. Much has been learned since the first World Ocean Day in 1992 – the international science community has charted more of the ocean floor – from 1% to over 20%. World-class institutes like the National Oceanography Centre have developed new deep-diving exploration technology that reach depths of more than 6 kilometres (nearly 4 miles). Each scientific mission to the ocean floor reveals new species and discoveries.

“We have harnessed satellite technology to give us the global picture and have developed micro-sensors that measure minute traces of chemicals in the ocean in parts per million. At NOC we have developed a new generation of submarine robots that have the potential to cross 6000km of ocean – from one continent to another. We are on course to learn so much more about an environment that is central to our terrestrial lives and holds so many answers and yet, still so many mysteries.”