Wind speed and the air-sea exchange of climatically important gases 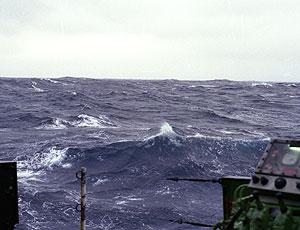 DMS is the precursor of sulphate particles upon which cloud droplets form, and elucidating the factors controlling its release from the ocean into the atmosphere is therefore important for understanding climate.

Scientists have discovered that, in moderate conditions, the release of dimethyl sulphide (DMS), from the ocean surface increases linearly with wind speed

The exchange of gases between the oceans and the atmosphere has an important influence on climate. Scientists have discovered that, in moderate conditions, the release of one such gas, dimethyl sulphide (DMS), from the ocean surface increases linearly with wind speed.

DMS is the most abundant sulphur-containing chemical emitted to the atmosphere from the ocean. It is a breakdown product of a chemical produced by phytoplankton, the algae that dominate biological production in the sunlit surface layer of the sea.

“DMS is the precursor of sulphate particles upon which cloud droplets form, and elucidating the factors controlling its release from the ocean into the atmosphere is therefore important for understanding climate,” said Dr Margaret Yelland of the National Oceanography Centre, Southampton.

The research team, which also included scientists from the University of Hawaii and Plymouth Marine Laboratory, measured DMS fluxes during a research cruise aboard the RRS Discovery in the subtropical east Atlantic, west of the Iberian Peninsula, as part of the 2007 Deep Ocean Gas Exchange Experiment.

“Although factors such as spray from breaking waves, whitecaps and bubble formation may explain some of the scatter in our results, the nice thing is that we find a relatively simple linear relationship between wind speed and DMS release at wind speeds between about 4 and 10 metres a second,” said Dr Yelland.

This means that under these moderate conditions, the average amount of DMS released increases steadily with wind speed and can be predicted without worrying too much about the detailed physics.

DMS is more soluble in water than other climatically important gases such as carbon dioxide, and bubble formation should therefore only enhance DMS release to a limited extent, which is what the researchers found. In contrast, previous results show that greater amounts of carbon dioxide are released for the same conditions.

“Our next challenge will be to understand the factors controlling DMS release at lower and higher wind speeds, and also whether our findings apply across the wide variety of environments in the world’s oceans,” said Dr Yelland.

The work was supported by the US National Science Foundation and United Kingdom’s Natural Environment Research Council.