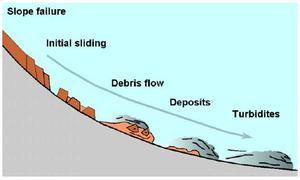 Underwater landslides are potentially very damaging: they can generate tsunami waves and destroy expensive and crucial seabed infrastructure, such as pipelines and cables.

A study carried out by researchers at the National Oceanography Centre (NOC) suggests that, contrary to some hypotheses, very large submarine landslides on continental slopes are no more likely to occur as climate change continues to affect global ocean temperatures and sea level. The authors note, however, that better information on landslide ages is needed to determine with confidence whether this is the case.

The study – published recently in the scientific journal Quaternary Science Reviews – interrogated the geological record to investigate whether the frequency of underwater landslides increased during periods of warming on Earth. Data from the last 30,000 years revealed no statistically significant correlation between landslide frequency and global sea level change, which is a proxy for warming on a global scale. However, there are large uncertainties in these ages, and it may be that their resolution is too low to show such a trend.

The biggest landslides on Earth occur underneath the surface of the ocean. These submarine landslides have the potential to both destroy underwater infrastructure – such as cables and pipelines – and generate damaging and far-reaching tsunamis. In 1998, for example, a large submarine landslide triggered a tsunami in the Pacific Ocean, which killed 2,200 people in Papua New Guinea.

The processes that cause mass failure on submarine slopes remain poorly understood, therefore scientific research is attempting to unravel how, why and where they may be likely to occur. One hypothesis is that climate change may be a key factor, through mechanisms such as methane hydrate dissociation. Methane hydrate is an ice-like substance found beneath the seabed that ‘melts’ as ocean temperatures increase, rendering submarine slopes unstable.

“Scientists have proposed that changes in global climate could lead to more submarine landslides,” says lead author Dr Morelia Urlaub, former PhD student at University of Southampton Ocean and Earth Science, which is based at the centre. “Sea level will most likely continue to rise rapidly in the coming decades, therefore we need to understand whether there will be an increased landslide-tsunami risk.

Working with National Oceanography Centre researchers, Dr Urlaub compiled data from subsea rock sequences from across the globe, formed from sediment deposited by large landslide events. Event ages were estimated using dating techniques. This resulted in the most comprehensive dataset of its kind. 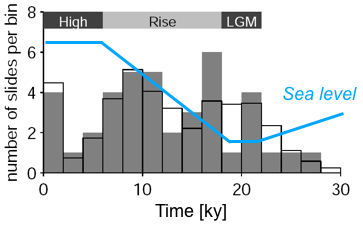 However, the authors caution that the uncertainties may be too large for a correlation with rapid sea level rise to be recognised. “We need much better information on the ages of submarine landslides to confirm this finding,” says Dr Urlaub.

Follow up research will be conducted under the Natural Environment Research Council-funded project, ‘Will climate change in the Arctic increase the landslide-tsunami risk to the UK’, which was launched last year. This UK collaborative project aims to investigate the ways in which Arctic climate warming could potentially influence the stability of marine sediment slopes and trigger underwater landslides.

The study was funded through a Natural Environment Research Council PhD studentship.

NOC researchers also carried out a study into triggers of submarine landslides off northwest Africa over the last 600,000 years. Led by Dr James Hunt, the team found no significant correlation between event occurrence and sea level change. The findings were published recently in Marine Geology.