When did modern rates of sea level rise start? 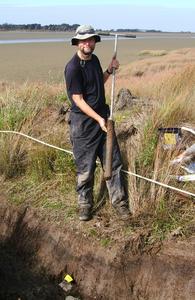 Professor Philip Woodworth of the National Oceanography Centre (NOC) in Liverpool and Professor Roland Gehrels of Plymouth University asked when sea level rise started to accelerate – and narrowed it down to a point in the early 1900s.

Geologists will tell you that, in terms of the Earth’s history, this is no new phenomenon. Over millions of years sea levels have risen and fallen with natural cycles in variables – such as the planet’s distance from the Sun and atmospheric carbon dioxide (CO2) levels – that influence how much water is locked up in ice caps.

Most of us are familiar with the concept that, since the Industrial Revolution, the concentration of CO2 in Earth’s atmosphere has been increasing and, because of its role as a greenhouse gas, this has increased global temperatures. This recent warming seems to be having all kinds of impacts on our planet, not least affecting the rate of change of sea level.

Sea level from the instrumental record

The first systematic measurements of sea level from direct observations date back to the late 17th century, but it was not until the mid-19th century that the first ‘automatic’ tide gauges were developed. A traditional tide gauge (or sea level recorder) consisted of a ‘stilling well’, a float and a pen recorder, assembled in a way that allowed the pen to draw a tidal curve on a rotating drum of paper as the tide moved up and down.

Today the Permanent Service for Mean Sea Level (PSMSL), which is based at NOC’s Proudman Building in Liverpool, collects and interprets sea level data from a global network of far more sophisticated tide gauges, that use acoustic, pressure or radar techniques to measure sea level.

However, there is only a handful of such tide gauge records which span the 19th-21st centuries, and most of these long time series come from tide gauges in northern Europe. Consequently, while their data suggest a gentle acceleration in sea level rise from the 19th to 21th centuries, this finding cannot be claimed to be globally-representative.

As a result we need to access data from geological and other techniques to help us to extend the sea level record.

The technique that Professor Roland Gehrels from Plymouth University and Professor Philip Woodworth of the National Oceanography Centre in Liverpool employed was based on data from cores of salt marsh sediments. Although they only had a small number of these cores, they included cores from northern as well as important southern hemisphere locations. 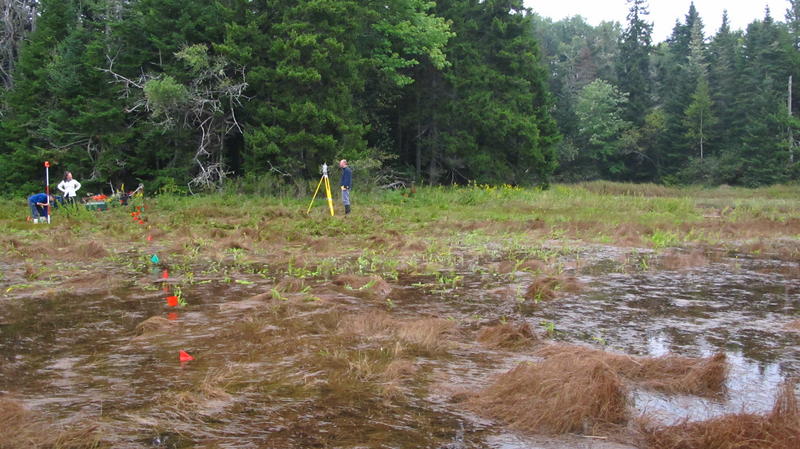 Within these sediments are tiny fossilised marine organisms, called diatoms and foraminifera, that can be used to infer changes in sea level. These organisms tend to form populations that are specific to certain levels up and down a marsh, therefore by looking at present day marsh populations, you can estimate where the fossilised populations lived relative to sea level.

Salt marshes build up every year as new sediment is deposited by the tides. Therefore if you take a core through today’s marsh you will see the layers that have accreted over time. By estimating the microfossil populations within the layers – involving a lot of staring through microscopes – and, most importantly, if the different depths can be adequately dated, then you can obtain a direct measure of how sea level has changed with time.

The method depends critically on the ‘uniformitarian principle’, in which one assumes that natural environmental processes occurring in the modern day are the same processes that shaped the fossil record.

This approach, called salt marsh stratigraphy, is a well-established methodology for indicating sea level change. However, Woodworth and Gehrels only used data points that had been directly dated by this technique, rather than using age-depth data points obtained by interpolation, which it is believed can lead to ‘false’ results.

The marsh data tend to provide information on sea level change for several centuries in the past. These time series will also contain an underlying rate of change driven by global and regional changes on much longer timescales – in this study, these ‘baseline’ (or ‘Holocene’) rates were derived using other conventional geological sea level dating methods.

For comparison, Professors Woodworth and Gehrels also made use of results of a ‘virtual station’ technique developed by Dr Svetlana Jevrejeva from NOC in Liverpool and colleagues, which successively combines individual tide gauge records into regional and global time series.

So when did this acceleration in sea level rise start?

This is an important practical as well as scientific question.

In order to make meaningful predictions of future sea level rise, we need to understand what the underlying mechanisms were that drove historical variations. All over the globe low-lying coastal populations are living with the threat of coastal flooding from rising water levels, but often the costs of minimising the risk to human life and infrastructure are outweighed by the uncertainty assigned to future predictions.

Addressing this question is no simple task because we have to be aware of the fact that sea level variability (and any accelerations therein) may vary between regions, because of the many climatic factors influencing the ocean. As a result, a long record of sea level taken from, say, a UK salt marsh may or may not exhibit similar evidence for long-term accelerations as a marsh from New Zealand.

The authors therefore compiled sea level records back to 4,000 years ago (to provide the baseline rate) from seven sites around the world – two from the eastern North Atlantic, three from the western North Atlantic, one from the Tasman Sea and one from the southwest Pacific – and analysed tide-gauge records near these locations where possible. Only for the Tasman Sea were instrumental records not available, but in all other sites they agreed with the sea level reconstructions obtained from the salt marshes. The salt marsh records, however, went much further back in time and covered the period before and after the acceleration, thus allowing the authors to date the onset of modern sea-level rise.

Each of the seven sites show that modern rates of sea level rise began in the early 20th century between 1905 and 1945, and that during the 20th century sea levels increased at a much quicker rate compared with the 19th century.

The driver for this acceleration cannot be established with great certainty by the current study, but there is something about the timing and magnitude of the change that gives clues as to why sea level rise accelerated in the early 20th century.

The results therefore support the theory that modern rates of sea level rise were triggered by the melting of the Greenland Ice Sheet and Arctic glaciers. Ongoing work in the Falkland Islands, where Gehrels led a field campaign in February this year, is aimed at testing this hypothesis. The ultimate goal of the research is to account for all possible contributions to historical sea-level rise in order to improve our predictions for the future.