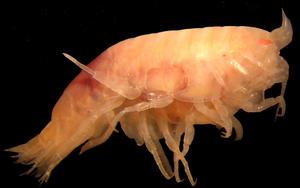 Two new species of submarine shrimp-like creature, capable of ‘stripping’ a pig carcass in a matter of days, have been discovered by a team of scientists from the National Oceanography Centre (NOC).

These 3mm long scavenging crustaceans, known as amphipods, live in depths of up to 4500 metres in the North Atlantic Ocean. They act in swarms to strip the carcasses of dead marine animals, including whales, fish and seabirds.

The lead author of this study, published today in Zootaxa, Dr Tammy Horton from the NOC, said “Amphipods are incredibly diverse and adaptable; there are currently around 10,000 species known to science. They live in all marine environments, from shallow waters to the ocean’s deepest trenches, on land and in fresh water.”

In order to catch these new species, scientists put mackerel bait in a trap and let it descend into the deep waters. When the traps were retrieved they contained up to 40,000 amphipods!

The new amphipod species have been named in honour of the late, great taxonomist, Roger Bamber, who passed away in February this year. Taxonomy is the science of description, naming and classification of animals or plants. The two new species named are ­Paracallisoma idioxenos and Haptocallisoma lemarete.

Tammy added “I gave the species name ‘lemarete’ to one of the amphipods because it translates from Greek to ‘Bold and Excellent’, which is the motto on Roger Bamber’s coat of arms. I chose this name because it is an accurate description of Roger, as well as being a little cryptic. Roger always put a lot of thought into the names he gave species, such as the tanaid species he named after a many-legged creature in Terry Pratchett’s Discworld.”

The study also describes two groups of closely related species (genera), one of which has been named Haptocallisoma, which means grasping in Greek, because their feet are able to cling to whatever they are eating.

This research forms part of the NOC’s ongoing study of the deep-sea environment, in addition to the centre’s work with the oil and gas industry on environmental impact assessments.