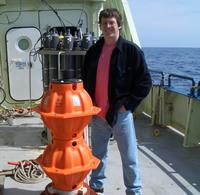 The principle is rather like watching your bath fill: you don’t look near the taps, where all you can see is splashing and swirling, you look at the other end where the rise is slow and steady.

UK oceanographers have thought of a novel way to measure the global ocean – weigh it. In research published this week, scientists from the National Oceanography Centre in Liverpool and Newcastle University have proposed an idea that will assess the mass of the world ocean by weighing at a single point.

The National Oceanography Centre’s Prof Christopher Hughes said “ We have shown that making accurate measurements of the changing pressure at a single point in the Pacific Ocean will indicate the mass of the world ocean. And we know where to place such a pressure gauge – the central tropical Pacific where the deep ocean is at its quietest. This instrument needs to be located away from land and oceanic variability. The principle is rather like watching your bath fill: you don’t look near the taps, where all you can see is splashing and swirling, you look at the other end where the rise is slow and steady.”

Global sea level is currently rising at about 3 mm per year, but predictions of rise over the century vary from 30 cm to over a metre. There are two ways global sea level can increase. The water in the oceans can warm and expand, leading to the same weight of water taking up more space. Alternatively, more water added to the ocean from melting of land ice will increase the ocean’s weight.

By a lucky chance, pressure measurements have been made in the Pacific Ocean since 2001, as part of the U.S. National Tsunami Hazard Mitigation Program, which focuses on detecting the small pressure fluctuations produced by the deep ocean waves that become tsunamis at the coast. From these measurements, Chris Hughes and his team have been able to show that a net 6 trillion tonnes of water enters the ocean between late March and late September each year, enough to raise sea level by 1.7 cm and leaves the ocean in the following six months.

But there is a catch – an instrument sensitive enough to make these measurements on longer time scales has not yet been developed. At the moment oceanographers can measure how quickly the oceans are filling with thousands of drifting moorings, tide gauges and satellites, but the methods are complex and fraught with uncertainties; a simple pressure measurement could solve this problem. However, a sensor sensitive enough to measure long-term changes does not yet exist. The group is hoping that engineers will rise to the challenge of developing an instrument capable of measuring fractions of a millimetre of water (a few pascal) per year, while sitting under the immense pressure of 4 km (more than two and a half miles) of water.

Prof Hughes said “What we are most interested in is how much water accumulates in the ocean each year, and this is where we currently have a problem. While present instruments are able to measure pressure variations very accurately, they have a problem with long term trends, producing false outcomes.

“This is a challenging goal. The pressure changes are smaller than the background pressure by a factor of about 10 million, and the deep ocean is a hostile environment for mechanical components with erosion and high pressures. However, there are many other measurement systems with this kind of accuracy and there is no reason, in principle, why someone with a new idea and a fresh approach could not achieve this.

“The person who has that idea will have solved the biggest measurement problem in sea level science, and produced an instrument of enormous value in other branches of oceanography.”