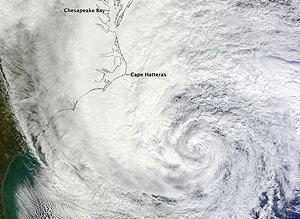 Are there more tropical cyclones now than in the past – or are we just hearing more about them through media, and detecting them more successfully with satellites?

That is the question addressed in new research from Denmark’s Niels Bohr Institute, which demonstrates an increasing tendency for cyclones to occur when the climate is warmer, as it has been in recent years. The results are published in the scientific journal Proceedings of the National Academy of Science. The research was led by Aslak Grinsted from the University of Copenhagen. Dr Svetlana Jevrejeva of the National Oceanography Centre in Liverpool is one of the co-authors.

Storm surges are considered the most dangerous and destructive aspect of tropical cyclones. The study shows that globally warm years have been associated with a significantly higher risk of extreme hurricane storm surges, such as the one that followed Hurricane Katrina, engulfing the New Orleans area in 2005, causing devastating floods and resulting in the deaths of at least 1,800 people.

Examining the frequency of tropical cyclones throughout history is made more problematic as they have not been systematically registered. Today cyclones are monitored from satellites and researchers can follow their progress and direction very accurately. But it is only in the last 40 years or so that we have been able to do this. Previously observations were made from ships and aircraft, but these were not systematic measurements. In order to get a long-term view of the frequency of cyclones, it is necessary to go further back in time and use a uniform reference. Climate scientists from the UK, Denmark and China wanted to find some instruments that have taken measurements continuously over a longer period of time.

Tropical cyclones typically form out in the Atlantic Ocean and move towards the US East Coast and the Gulf of Mexico. The team used historic tidal records, taken on the east coast of the United States over nine decades, to get a more extended data set. Dr Jevrejeva explained “We found that there were monitoring stations along the Eastern Seaboard of the United States where they had recorded the daily tide levels all the way back to 1923. Every time there was a rapid change in sea level we could see that there was a close correlation between sudden changes in sea level and historical accounts of tropical storms.”

Scientists now had a tool to create statistics on the frequency of cyclones that make landfall – all the way back to 1923. They could see that there has been an increasing trend in the number of major storm surges since then.

“We could see that there was a tendency in warmer years for more cyclones by counting how many extreme cyclones with storm surges occurred in warm years, compared to cold years”, said Dr Jevrejeva.

The south eastern United States has experienced an increasing number of large storm surges from tropical storms since 1923. But not all cyclones are equally harmful, and those with the highest storm surges tend to cause the most damage. Cyclones with a strength comparable to Katrina make landfall every 10 to 30 years on average.

The research team have calculated that extreme hurricane surges like that from Katrina are twice as likely in warm years than in cold years. They pose the question: if the global climate becomes three degrees warmer in the future, as predictions indicate, what happens then?