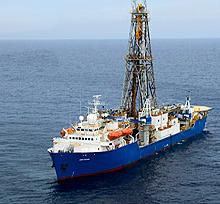 Video of deep-ocean drilling research will be featured at this year’s 2012 AGU meeting in California, including the debut of a new 20-minute documentary of the expedition in the Atlantic this summer.

Shot, edited and broadcast while on board the research drill ship, JOIDES Resoulution, the videos featured scientists working to retrieve climate records from the ocean floor. Produced during the expedition by Dutch filmmaker Dan Brinkhuis of ScienceMedia NL, the videos detail the science goals and technical challenges of the expedition (http://bit.ly/UcMNPT).

The research was led by Prof Paul Wilson of University of Southampton’s Ocean and Earth Science based at the National Oceanography Centre. He was the Co-Chief of Expedition 342, part of the Integrated Ocean Drilling Program, IODP, series of missions. The seven videos show Paul and his team drilling deep into the ocean floor to retrieve sediment cores that chart climate conditions many million of years ago. During this time Earth’s climate has moved from a tropical ‘hothouse’ environment to cooler ‘icehouse’ conditions that heralded the first polar ice sheets.

The expedition succeeded in retrieving sediment cores and data from several famous events, including the Paleocene-Eocene Thermal Maximum (PETM), the Cretaceous/Paleogene (K/Pg) boundary, and the Eocene-Oligocene boundary.

The PETM, which hit a peak about 56 million years ago, is notable for extraordinarily high average temperatures – warm enough to have kept nearby Greenland completely free of ice. The K/Pg boundary, about 65 million years ago, is marked by evidence of the asteroid impact that killed the dinosaurs.

The Eocene-Oligocene boundary, about 33 million years ago, marks the division between the ‘greenhouse’ conditions of the late Eocene and the ‘icehouse’ conditions of the Oligocene. The transition was unusually rapid in geologic terms, taking only a few hundred thousand years. The cause of the sudden and dramatic cooling remains uncertain, but appears to have involved a ‘tipping-point’ response to a very slow decrease in greenhouse gases coupled with a shift in Earth’s orbit. Together, the changes favoured cool summers and triggered rapid ice growth on Antarctica.

“What happened next in the northern hemisphere,” explains Wilson, “is something for us to find out from our drill cores.”

“This is a site that will go down truly in history, I think,” says Norris. “Because we have, by far and away, the most detailed record of this sort of transition into a fully glaciated world, that exists anywhere on the globe, right here.”

The team also retrieved cores from a very large drift of Oligocene-Miocene sediments, deposited from 23 to 5 million years ago – much of which contains spectacularly well-preserved carbonate fossils. Because of its size and conspicuous olive hue, the team nicknamed this sediment drift ‘The Green Monster’.

JOIDES Resolution was working near the coast of Newfoundland, Canada, quite close to the final resting place of RMS Titanic. To broadcast video live from the ocean is expensive and technically challenging.