Venturing into the Weddell Sea to monitor the changing Southern Ocean 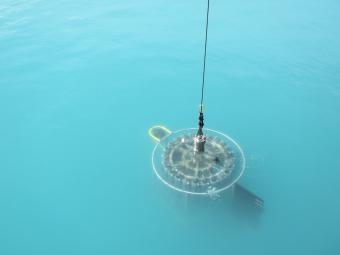 The team on board RRS Discovery as part of the ORCHESTRA project recently completed 104 casts measuring conductivity, temperature and depth along three sides of the Scotia Sea and into the Weddell Sea, as well as the first hydrographic survey in the western arm of Cumberland Bay, South Georgia.

By measuring where and how much of properties such as heat are stored in the Southern Ocean, and how they are exchanged between different ocean basins, these hydrographic surveys help enhance understanding of the role of the Southern Ocean in absorbing and storing heat and carbon.

NOC scientist Dr Yvonne Firing, who led the research expedition, said “The two main hydrographic sections of this research expedition are part of a long-running data set of physical properties of the Southern Ocean, such as temperature, salinity, and currents. These long-term measurements are rare in the Southern Ocean, and are important for enabling us to distinguish trends from variability in deep ocean temperature, as well as what drives them.”

“As time goes on, we will add new types of measurements, which can then take advantage of the context and knowledge provided by the existing data sets.  Some may be built into new ongoing time series themselves.”

“One of my personal sightseeing highlights of the expedition was an iceberg that appeared green, rather than blue, because of where it formed and the different index of refraction of salty ice.”

The scientists on board also sampled microplastics in the water, oxygen and nutrient isotope ratios, and environmental DNA. These measurements will reveal insights into sea ice and glacial ice melt, as well as the marine life present.

Tags:
Ocean Regulation of Climate by Heat and Carbon Sequestration and Transports (ORCHESTRA)