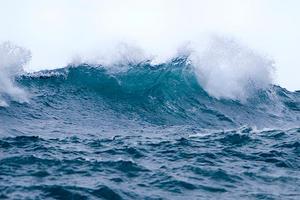 A mystery in the ocean near Antarctica has been solved by a team including researchers at the National Oceanography Centre who have long puzzled over how deep- and mid-depth ocean waters are mixed.

They found that sea water mixes dramatically as it rushes over undersea mountains in Drake Passage – the channel between the southern tip of South America and the Antarctic continent. Mixing of water layers in the oceans is crucial in regulating the Earth’s climate and ocean currents.

The research provides insight for climate models which until now have lacked the detailed information on ocean mixing needed to provide accurate long-term climate projections. The study was led by the University of Exeter, working with the University of East Anglia, the National Oceanography Centre, the Woods Hole Oceanographic Institution, the British Antarctic Survey and the Scottish Association for Marine Science and is published in the journal Nature: Rapid cross-density ocean mixing at mid-depths in the Drake Passage measured by tracer release.

Working in some of the wildest waters on the planet, researchers measured mixing in the Southern Ocean by releasing tiny quantities of an inert chemical tracer into the Southeast Pacific. They tracked the tracer for several years as it went through Drake Passage to observe how quickly the ocean mixed.

The tracer showed almost no vertical mixing in the Pacific but as the water passed over the mountainous ocean floor in the relatively narrow continental gap that forms the Drake Passage it began to mix dramatically.

Professor Andrew Watson from Geography at the University of Exeter (previously at the University of East Anglia) said “A thorough understanding of the process of ocean mixing is crucial to our understanding of the overall climate system. Our study indicates that virtually all the mixing in the Southern Ocean occurs in Drake Passage and at a few other undersea mountain locations. Our study will provide climate scientists with the detailed information about the oceans that they currently lack.”

Scientists believe that the lower concentrations of atmospheric carbon dioxide present during the ice ages may have been the result of slower ocean mixing between the surface and the deep sea. Although the reasons for this are not yet clear, this further emphasises the link between ocean mixing and climate.

This research was funded by the UK Natural Environment Research Council (NERC) and the US National Science Foundation (NSF). Andrew Watson is supported by the Royal Society.