UK scientists team up with Canadians in Arctic expedition 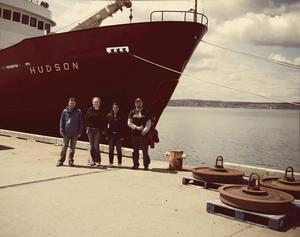 A team of UK scientists have embarked on a shipboard expedition to the Labrador Sea aboard the research vessel CCGS Hudson, to further understanding of how carbon dioxide is locked away from the atmosphere by ocean processes.

Led by Dr Stephanie Henson from the National Oceanography Centre, the team will measure the sinking of organic carbon, the availability of organic nutrients and the diversity and abundance of marine algae called ‘phytoplankton’ in these Arctic waters.

The Labrador Sea is thought to be an important region for oceanic uptake of carbon dioxide (CO2). During winter months, surface waters absorb atmospheric CO2 before being mixed down to the deep ocean, locking the greenhouse gas away from the atmosphere. In contrast, during summer intense blooms of phytoplankton develop which transfer carbon from the atmosphere to the ocean as they die and sink. But until now, there have been few estimates of carbon export in this region.

“Only three measurements currently exist,” says Dr Henson. “We have made estimates elsewhere by measuring concentrations of thorium – a highly particle reactive element – and coupling these to estimates of the carbon/thorium ratio in sinking particles. Using sea surface temperature and chlorophyll data from satellites we can then extrapolate globally because export efficiency is related to temperature”.

“However, this relationship appears to break down at low temperatures, which we think may be related to the strong seasonal nature of phytoplankton blooms in cold places.”

The planned measurements of carbon export will therefore be vital in refining estimates of how much carbon is drawn down into the ocean globally, by the ‘biological carbon pump’. Investigation of this major term in the global carbon cycle is one element of the pan-Atlantic EURO-BASIN project which involves scientists from Canada, the EU and the US.

The phytoplankton samples will complement a 20-year archive of samples of these tiny plants, which grow in the sunlit surface waters and form the base of marine food chains. The samples will be studied to investigate how the species composition of the mixed phytoplankton assemblage responds to natural and man-made climate variability. This region is particularly interesting because waters near to Greenland are heavily affected by ice and glacial melt, which respond strongly to variations in temperature.

The organic nutrient measurements will allow a key hypothesis regarding how an observed imbalance in Arctic Ocean nutrient budgets, reported in a recent study led by Dr Sinhué Torres-Valdés at the National Oceanography Centre, is sustained.

Dr Torres-Valdés (NOC) and Glaucia Fragoso (University of Southampton Ocean and Earth Science, which is based at NOC) will be joining colleagues from Bedford Institute of Oceanography on the expedition. Drs Henson and Frederic Le Moigne (NOC) have been in Canada to help mobilise the expedition.

Glaucia Fragoso is a PhD student and her participation in the cruise is funded by an Added Value Award from the UK Ocean Acidification research programme.

The Bedford Institute of Oceanography undertakes an annual transect across the Labrador Sea aboard the CCGS Hudson, an offshore oceanographic and hydrographic survey vessel operated by the Canadian Coast Guard. Each year the scientists on board take physical, biological and chemical measurements of the ocean.