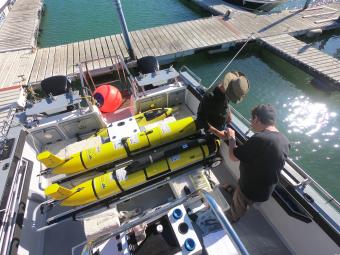 State-of-the-art ocean robots are currently profiling waters off South Africa to collect data that supports a UK-Africa partnership aimed at improving understanding of how regional fisheries are sustained.

The robots – known as ocean gliders – change their buoyancy which enables them to glide through the ocean and gather measurements from the sea surface down to depths of hundreds of metres. Glider missions can run for many months with directions being sent remotely via two-way satellite communications (Iridium) link. They use little energy and so are inexpensive to operate compared to using traditional methods.

Working in partnership with the Nelson Mandela University (NMU) in Port Elizabeth, South Africa and a broad range of East African partners, this mission marks the starting point of an intensive study into how natural cycles and changes in climate impact on West Indian Ocean fisheries.

Dr Matthew Palmer of the NOC, who is leading the deployment, explains: “Each of the three gliders deployed in this operation has unique, specialist capabilities and equipment payloads; measuring ocean structure and mixing, sensors for measuring nutrients that fuel growth, and an echo-sounder that can detect schools of fish and other marine life.”

This South African mission supports investigations by Prof. Mike Roberts at NMU into historical crashes in squid fisheries, which have had devastating impacts on South African fishing communities. These missions will aim to test whether marine autonomous technologies may assist developing nations to achieve marine monitoring and assessment capability without the need for large research ships, which are too expensive for the vast majority of coastal states.

If successful, a future mission is planned in Zanzibar, Tanzania, later in 2019, which will focus on small pelagic fish stocks that support many of the poorest communities in East Africa. This work is part of the wider SOLSTICE Project, which is funded by the UK Government under its Global Challenges Research Fund (GCRF).