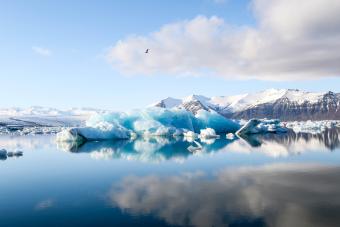 For the first time, the UK and Germany have joined forces to investigate the impact of climate change on the Arctic Ocean through a series of projects, two of which involve the NOC.

The UK’s Natural Environment Research Council (NERC) and Germany’s Federal Ministry of Education and Research (BMBF) have jointly invested almost £8 million in 12 new projects to carry out crucial research in one of the most inhospitable regions on the planet. The new projects started in early July 2018 and join the existing NERC Changing Arctic Ocean research programme, which aims to better understand – and predict – changes to the Arctic marine environment and ecosystems.

The Arctic Ocean’s ecosystem is especially sensitive to warming because of its reliance on sea ice; the accelerated melting of sea ice threatens the existence of the animals, plants and microbes that rely on it. With cutting-edge science from 32 UK and German research organisations, the NERC Changing Arctic Ocean programme is helping to address these challenges. Furthermore, the MOSAiC expedition will be launched in the autumn of 2019 - under the leadership of the Alfred Wegener Institute, the German research vessel Polarstern will be lodged in the Arctic sea ice for a year in order to drift with the ice across the central Arctic. This unique expedition will also involve scientists engaged in German-British collaboration.

The NOC will be leading the APEAR project, which aims to understand how sea ice decline and longer summer seasons will change the pathways of nutrients entering the Arctic Ocean from the Atlantic and Pacific. The partners in this collaborative project will collect and analyse unique, year-round in situ ocean data in the high Arctic. Once analysed, these data will be combined with ultra-high resolution, state-of-the-art, sea ice-ocean-ecosystems modelling to examine changes in Arctic ecosystem provinces.

The NOC will also be collaborating on the PEANUTS project, which will be examining how increased mixing in the Arctic could affect primary production. As part of this project, the NOC is preparing to deploy instrumentation for a year near the shelf edge in the Barents Sea. In addition, the project team will collect turbulence profiler data and water samples to learn more about nitrate uptake and cycling. The data will be used in biogeochemical ecosystem modelling to assess future Arctic change.

UK Science Minister Sam Gyimah said: "I am proud the UK is leading the way in tackling harmful climate change and today’s announcement means world-class researchers from both the UK and Germany will now be doing vitally important work to understand changes to marine life in the Arctic Ocean."

German Federal Research Minister Anja Karliczek emphasizes the particular importance of international cooperation in Arctic research: “What is happening in the Arctic strongly impacts global climate and therefore also us in Europe. We need research on the fast changes occurring in the Arctic because these changes affect us all.”

Professor David Thomas, Bangor University, is the Chair of the Programme’s Advisory Group and explains the role of international Arctic research in the programme:  “International collaboration is essential to understand how the Arctic Ocean is responding to climate change. This concerted effort from the UK and Germany, with partners from Norway, Canada and South Korea, will be pooling the knowledge and expertise of scientists in both countries."

The Changing Arctic Ocean programme started in February 2017 with four large research projects (ARISE, Arctic PRIZE, ChAOS, DIAPOD) funded by NERC. These projects have more than 80 scientists from 18 UK research institutions, including the NOC. As of July 2018, the programme will include a further 12 projects (APEAR, CACOON, CHASE, Coldfish, Diatom-ARCTIC, Eco-Light, EISPAC, LOMVIA, Micro-ARC, MiMeMo, PEANUTS, and PETRA) co-funded by NERC and BMBF; this increases the programme to over 170 scientists working at 32 organisations, and these scientists are also working closely with Arctic teams in 15 other countries. The outcomes of the programme will contribute to improving predictions of the Arctic for international policy making.