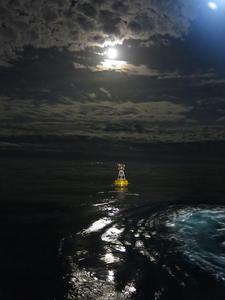 The UK has become the newest member of an international consortium supporting science on greenhouse gasses, through long-term research infrastructure.

Professor Richard Sanders from the NOC, commented “It is really exciting that the UK science community came together and worked so successfully and collaboratively to enable us to formally commit to the ICOS consortium. Greenhouse gas science is fundamentally international and becoming the 12th member allows key UK sites to play their part in establishing the European GHG budget, as well as enabling UK researchers to access a diverse range of supporting services.”

A world-class community of UK researchers work on GHG science issues, ranging from establishing emissions with rigorously evaluated uncertainties, through to evaluating likely future changes and the efficacy of potential policy responses. This community operates across marine, atmospheric and terrestrial systems and is underpinned by a strong UK network of diversely funded observing systems.

All the key UK sites submitted to ICOS are funded wholly or in part by the Natural Environmental Research Council (NERC) and include: the Porcupine Abyssal Plain (PAP)  sustained ocean observatory run by the NOC and the Met Office; the UK-Caribbean line, run by the University of Exeter and the NOC; the Western Channel Observatory, run by the Plymouth Marine Laboratory; the Auchencorth Moss ecosystem station, run by the Centre for Ecology and Hydrology;  and the Weybourne Atmospheric Observatory, run by the National Centre for Atmospheric Science and the University of East Anglia.

The PAP sustained ocean observatory is situated in the subpolar Northeast Atlantic at a water depth of 4800 metres, it is the longest running multidisciplinary open-ocean time series observatory in Europe and one of the longest in the world. Set up in 1986, has since become a major focus for international and interdisciplinary scientific research including water column biogeochemistry, physics and benthic biology.

The UK is also committed to co-host the ICOS Ocean Thematic Centre jointly with Norway and to contribute to the science research of the ICOS ERIC. This will involve, amongst other activities, scientists and engineers at the NOC working together to build technology to estimate surface CO2 concentrations in remote, under-sampled regions of the planet such as the Southern Ocean. This is likely to be based on novel sensors being placed on C-Enduro, an autonomous surface vehicle developed by the NOC in collaboration with industry partners.

Werner Kutsch, ICOS ERIC Director General, blogged “I cordially welcome our UK colleagues. The UK is an important and ambitious country in the mitigation of climate change. UK’s GHG emissions (excl. Land use, land-use change and forestry) were reduced by 34.3 % between 1990 and 2014 (EEA 2016). This is 10 % more than the European average.”

For more information on the UK’s role in ICOS visit the website.