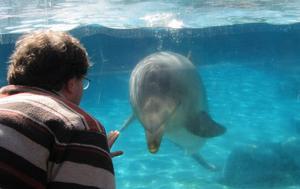 I sat down and worked out what pulse I would use if I were a dolphin.

Scientists at the University of Southampton have developed a new kind of underwater sonar device that can detect objects through bubble clouds that would effectively blind standard sonar.

Just as ultrasound is used in medical imaging, conventional sonar ‘sees’ with sound. It uses differences between emitted sound pulses and their echoes to detect and identify targets. These include submerged structures such as reefs and wrecks, and objects, including submarines and fish shoals.

However, standard sonar does not cope well with bubble clouds resulting from breaking waves or other causes, which scatter sound and clutter the sonar image.

Professor Timothy Leighton of the University of Southampton’s Institute of Sound and Vibration Research (ISVR), who led the research, explained:

“Cold War sonar was developed mainly for use in deep water where bubbles are not much of a problem, but many of today’s applications involve shallow waters. Better detection and classification of targets in bubbly waters are key goals of shallow-water sonar.”

Leighton and his colleagues have developed a new sonar concept called twin inverted pulse sonar (TWIPS). TWIPS exploits the way that bubbles pulsate in sound fields, which affects the characteristics of sonar echoes.

“To catch prey, some dolphins make bubble nets in which the best man-made sonar would not work. It occurred to me that either dolphins were blinding their sonar when making such nets, or else they have a better sonar system. There were no recordings of the type of sonar that dolphins use in bubble nets, so instead of producing a bio-inspired sonar by copying dolphin signals, I sat down and worked out what pulse I would use if I were a dolphin,” said Leighton.

As its name suggests, TWIPS uses trains of twinned pairs of sound pulses. The first pulse of each pair has a waveform that is an inverted replica of that of its twin. The first pulse is emitted a fraction of a second before its inverted twin.

Leighton’s team first showed theoretically that TWIPS might be able to enhance scatter from the target while simultaneously suppressing clutter from bubbles. In principle, it could therefore be used to distinguish echoes from bubble clouds and objects that would otherwise remain hidden.

In their latest study, the researchers set out to see whether TWIPS would work in practice. Using a large testing tank, they showed experimentally that TWIPS outperformed standard sonar at detecting a small steel disc under bubbly conditions resembling those found under oceanic breaking waves.

Encouraged by their findings, they next conducted trials at sea aboard the University of Southampton’s coastal research vessel the RV Bill Conway. They compared the ability of TWIPS and standard sonar to discern the seabed in Southampton Water, which handles 7% of the UK’s entire seaborne trade. The seabed in this area varies in depth between 10 and 20 metres.

“TWIPS outperformed standard sonar in the wake of large vessels such as passenger ferries,” said co-author Dr Justin Dix of the University of Southampton’s School of Ocean and Earth Science (SOES) based at the National Oceanography Centre, Southampton.

Possible future marine applications for TWIPS include harbour protection and the detection of bubbles in marine sediments and manufacturing. Technologies based on the same basic principles could be used in medical ultrasound imaging, which was already using pairs of inverted pulses to enhance (rather than suppress) contrast agents injected into the body. The TWIPS principle would work with other sensors such as in Magnetic resonance imaging(MRI), and Leighton has proposed TWIPR (Twin Inverted Pulse Radar) for the detection of improvised explosive devices or covert circuitry.

But what about the original inspiration for the research – do dolphins and other echo-locating animals use TWIPS?

“Key ingredients of a TWIPS system appear in separate species but they have never been found all together in a single species,” said Leighton. “There is currently no evidence that dolphins use TWIPS processing, although no-one has yet taken recordings of the signals from animals hunting with bubble nets in the wild. How they successfully detect prey in bubbly water remains a mystery that we are working to solve. I have to pay credit to the team – students Daniel Finfer and Gim-Hwa Chua of ISVR, and Paul White (ISVR) and Justin Dix of SOES. Our applications for funding this work were repeatedly turned down, and it took real grit and determination to keep going for the five years it took us to get this far.”