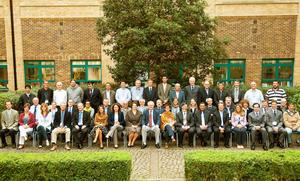 The National Oceanography Centre has played host to an international meeting of more than 60 experts working in the fields of earthquakes, sea level, risk assessment, tsunami warning systems and civil protection.

At the meeting they planned the first tsunami exercise for the NE Atlantic and Mediterranean region. This full-scale exercise, called NEAMWave 12, will be conducted later in the year.

Trevor Guymer runs the UK Office for the Intergovernmental Oceanographic Commission (IOC) from the National Oceanography Centre. He said “This event is part of the IOC Tsunami Programme. During the past few weeks, key areas of this region’s system have become operational; this meeting provided an important opportunity to update Member States so they can ensure appropriate national response plans are in place. We have had valuable input from colleagues working with tsunami warning systems in other regions.”

The UK has been involved for several years in the IOC’s Intergovernmental Coordination Group, particularly on sea level data and on mitigation and awareness. It has been instrumental in developing agreement on the system architecture that has been adopted.

This was the 9th meeting of the Intergovernmental Coordination Group for the Tsunami Early Warning and Mitigation System in the North-eastern Atlantic, the Mediterranean and Connected Seas.

For more information about this meeting see www.ioc-unesco.org/index.php?option=com_oe&task=viewEventRecord&eventID=....