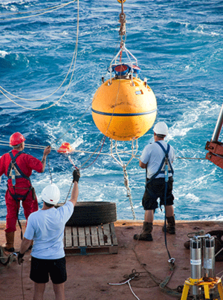 The National Oceanography Centre’s remarkable RAPID project has reached a landmark ten years of continuous scientific measurement and knowledge advancement of a key component of the climate system.

For the past decade, the RAPID project has continuously monitored the Meridional Overturning Circulation (MOC) of the Atlantic Ocean at 26.5°N. It is the part of the ocean circulation that carries heat from the equatorial region to higher latitudes and includes the northwards flowing warm waters of the Gulf Stream and the southward flow of cold North Atlantic Deep Water.

The heat carried by the MOC is released to the atmosphere at mid-latitudes and much of this is carried eastward by the westerly winds. As a consequence north-western Europe’s climate is milder than that of the North American Pacific coast at the same latitude. Paleoclimate records suggest that during the last Ice Age, the MOC underwent abrupt rearrangements that were responsible for a cooling of the European climate of between 5–10°C.

With all the data recorded by the RAPID project over the past ten years, scientists have learned how variable the MOC can be. For example, for the 12 months starting in April 2009 it was found the MOC was approximately 20% less than any other year. This was a much bigger change than had been expected.

Variability of the heat content of the Atlantic Ocean is believed to affect several aspects of the climate of surrounding regions, for example, the weather experienced by the UK and north-west Europe, the number of hurricanes, and the rainfall over the Sahel which is the region south of the Sahara.

As well as quantifying the changes and using these records to test climate models, the RAPID project scientists are learning about the mechanisms that cause these changes. For instance, most of the long-term variability is associated with changes on the western boundary of the Atlantic but measurements on the eastern boundary are needed to quantify the seasonal variability.

The National Oceanography Centre proposed the RAPID project and has led it from its inception, in collaboration with the University of Miami and the US Atlantic Oceanographic and Meteorological Laboratory.

The RAPID project’s principal investigator is Dr David Smeed, whose role is to plan the project’s work and to make sure it addresses the scientific questions that need to be answered – such as whether we can detect an effect of climate change on the MOC? Current climate models suggest the MOC is likely to weaken by about 30% in the coming century as a consequence of greenhouse gas emissions. Dr Smeed said the RAPID project has brought about a deeper understanding of the MOC as it is the only project that continuously monitors the Atlantic Ocean from west to east and from the surface to the ocean floor. To ensure the reliability and quality of the data NOC engineers and technicians have made numerous improvements to the design of the moorings on which the instruments are deployed. In the next phase of the project a NOC developed system to send data back via satellite communications will be implemented.

“To have completed ten years of continuous observations is a great success of which we are very proud. The project’s achievements would not be possible without the officers and crew who man the research ships that we use or without the technicians and scientists who go to sea to recover and deploy the instruments.”

However the RAPID project is not over yet, with current funding already in place until 2020. Dr Smeed said “We will continue monitoring the Atlantic until at least 2020 and hopefully longer. The climate changes slowly and in order to detect changes it is necessary to monitor the ocean for many years.”

For further information, go to the project’s website at www.rapid.ac.uk/rapidmoc or visit the blog at http://10yearsofrapid.blogspot.co.uk to read about a research cruise currently taking place.