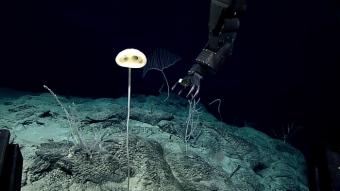 2020 saw the identification of almost 2,000 fascinating new marine species. The National Oceanography Centre (NOC), in collaboration with The World Register of Marine Species (WoRMS) and other scientists around the globe, has been working to decide which of these incredible creatures will make it to the WoRMS top-ten.

The World Register of Marine Species (WoRMS) has released a list of the top-ten marine species, since 2017, and the list for 2020 includes some particularly feisty and well-hidden creatures.

The list includes ‘The E.T. Sponge’ named after the famous alien film character thanks to the round body of the sponge having two openings that look just like eye sockets. Over two kilometres below the surface, explorers came across a deep-sea environment with strange and beautiful animals that looked more like an alien landscape than something found on Earth.

Another discovery included a new species of starfish named after Patrick Star from Spongebob Squarepants. It was discovered in the depths of the northwestern Pacific Ocean at a few locations 1.5-3 km below the surface. It gained its name not from the pink-red colour it shares with Patrick Star, but from its close association with another species – a sponge!

The Feisty Elvis Worm is known for the most stunning scales that resemble the sequins on Elvis’ signature outfits. These scaleworms were discovered on camera fighting and ‘jitterbugging’ in their natural habitat living up to their ‘feisty’ name.

NOC scientist, and the Chair of WoRMS Dr Tammy Horton, who has played an essential role in deciding on the selected top-ten said: “I have really enjoyed being able to help choose the Top-Ten Marine Species of 2020, this year we have some truly fascinating contenders, showing just how much more there is to learn about life on our planet. This list is a celebration of the amazing work that taxonomists do every year to describe new species, and also celebrates the global collaborative work of the World Register of Marine Species.”