Tiny crustaceans could play a crucial role in climate regulation 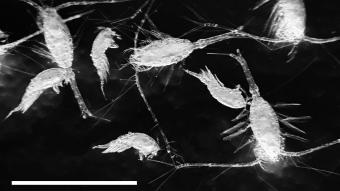 Understanding the feeding habits of zooplankton has the potential to dramatically improve the ability of scientists to predict changes in ocean carbon storage and our future climate, a new study has found.

The atmospheric concentration of carbon dioxide (CO2) continues to increase, year on year, playing a major role in warming the oceans and the surface of the Earth. This in turn wreaks havoc with global climate by changing weather patterns that lead to a diverse and significant range of threats such as rising sea levels, intense heat waves, powerful storms, the breakdown of ecosystems and widespread famine.

NOC research scientist, Dr Dan Mayor, lead author of the research paper published in BioEssays said: “If we want to know how humans will fare in the future, we need to understand the global climate in terms of carbon and how it interacts with all of the planet’s ecosystems before it reaches a point at which the earth can no longer provide conditions that are conducive to human life.”

Aim of the Study

The fundamental aim of the study was to improve understanding of future ocean carbon storage by incorporating the feeding activities of small, planktonic crustaceans into a new marine ecosystem model. These crustaceans, collectively called particle-associated copepods, are amongst the most abundant animals in the world yet they have barely been investigated.

This new study by Dr Mayor and Professor Tom Anderson (also of NOC Southampton), and by Associate Professor Wendy Gentleman (Dalhousie University, Halifax, Nova Scotia, Canada) suggests that these tiny creatures may play a crucial role in ocean carbon storage and, by factoring them into global models, climate change predictions may significantly improve.

Microscopic organisms called phytoplankton in the surface of the ocean take CO2 from the atmosphere and turn it into organic matter. Each year, these organisms are responsible for producing almost half of the total amount of organic matter generated on Earth.

This process forms part of the ‘biological carbon pump’ which plays a vital role in reducing the concentration of atmospheric CO2 by up to 50% and helps to regulate global climate. Understanding this process is integral to developing the capacity to reliably predict future ocean carbon storage and climate, although there is still much to learn.

Mayor and his colleagues speculated that tiny copepods, that are often found to associate with sinking particles, may inadvertently fragment marine snow as they search for microbes attached to the particles’ surfaces.

“We incorporated particle fragmentation by copepods into a simple ecosystem model and used it to predict the distribution of sinking particles throughout the depths of the ocean. Our results showed good agreement with data of real sinking particles in the North Atlantic Ocean. No one has done that before and we are very excited about the findings,”

“The feeding habits of particle-associated copepods could make them the principle agents of particle fragmentation in the ocean, and, as such, they may determine how much marine snow sinks to the ocean depths and thus influence global climate. This new way of thinking offers a step change in our ability to understand the future evolution of biologically-mediated ocean carbon storage.” said Dr Mayor.

It is imperative that scientists are able to make the most accurate climate change predictions possible and these are achieved using global marine biogeochemical models embedded within Earth System Models.

“The insights from these models help policy- and decision-makers to visualise and explore scenarios of what the future will look like, informing the decisions and actions we make today, specifically in relation to carbon emission strategies, and how these will play out for everyone on Earth in the future,” said Dr Mayor.

“Current global marine biogeochemical models do not fully represent all the biological mechanisms that operate in today’s ocean. Our study presents an important, biologically-meaningful mechanism that may explain how and why particles sink to where they do, and paves the way for its incorporation into Earth System Models. Although we have not made global predictions with it yet, the plan is to do so and see this mechanism pulled through in the future,” said Dr Mayor.

“We think this work is a great example of where very different disciplines have come together to produce new understanding of how the ocean might work.”