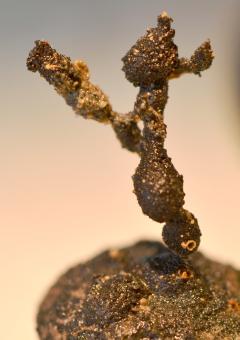 The necklace foraminiferan, described by NOC scientists Andrew Gooday, Daniel Jones, Aurelie Goineau and Erik Simon-Lledó, has made it onto the top-ten list of newly-described marine species of 2017, one of two top-ten lists compiled by the World Register of Marine Species (WoRMS) to celebrate a decade since it was established, which you can read about here.

At 8 cm tall, these are some of the largest single-celled organisms on the planet, and are the dominant megafaunal organisms in the area of the Pacific Ocean where they were discovered.

Also on the top-ten species of the last decade was the Hoff crab, which was first glimpsed using the NOC’s deep-water ROV.

The WoRMs team have announced their top-ten species to be described from all Earth’s habitats and taxa annually since 2008. Although this list often contains one or two marine species, the WoRMS team decided to pay homage to the ‘largest habitat on Earth’ by producing their own list of the top marine species. They hope some of their favourites will make it on to the global list.

In the last decade, since WoRMS was established, 21,554 marine species new to science have been described and added to the database. The oceans cover over 70% of the surface of our planet, and yet they still include the least explored regions (http://theconversation.com/how-many-undiscovered-creatures-are-there-in-...).

All editors of WoRMS were given the opportunity to nominate their favourite marine species from both the last year (2017) and the previous decade (2007-2017). A small committee, headed by Tammy Horton of NOC who is Chair of the Steering Committee of WoRMS, was brought together to decide upon the final candidates.

“The final candidates also feature particularly astonishing marine creatures, notable for their interest to both science and the public. Each of these marine animals has a story. It may be the among the deepest living or largest fish known, be considered a ‘living fossil’, an invasive species, the most abundant organism in a habitat, or have remained hidden in plain sight, hoodwinking researchers for decades.”

Read about the ten remarkable new marine species from 2017 by clicking on www.lifewatch.be/en/worms-top10-2017.