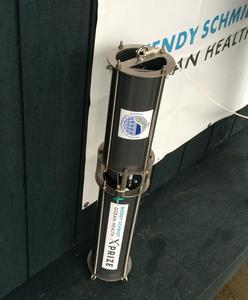 An innovative pH sensor developed by scientists and engineers at the National Oceanography Centre (NOC) has progressed through to the third phase of a four-part international competition in the USA.

The prestigious Wendy Schmidt Ocean Health XPRIZE was launched in September 2013 to find a new pH sensor to measure the ocean’s acidity. There is a total prize fund of (US) $2million and the competition has attracted a wide range of entrants from oceanographic institutes and technology companies from around the world.

NOC is one of only two organisations representing the UK and the team from NOC’s Ocean Technology and Engineering Group has developed a novel high performance sensor based on a microfluidic design which is very accurate, small in size and with low power and reagent requirements. It has been designed as an autonomous system able to operate on a number of oceanographic platforms and down to depths of several thousand metres.

After successfully completing Phase 1, the NOC team travelled to California last autumn and successfully put their device through a rigorous three-month test in controlled laboratory conditions at the Monterey Bay Aquarium Research Institute. Firstly, the sensor was suspended in synthetic seawater for several hours, where it demonstrated a high level of accuracy. It was subsequently suspended in a large seawater tank to record pH data. One measurement was taken every two hours, which was then used to assess the sensor’s long-term precision.

NOC’s sensor has now progressed to the third phase of the competition (coastal trials), which is now underway in Seattle. The sensor has been deployed in Puget Sound waters outside the Seattle Aquarium where it is recording pH on an hourly basis for a period of one month. The aim of this trial is to assess the performance of the sensor under varying environmental conditions and the pressures of biofouling.

NOC Team Leader Socratis Loucaides commented “This has been the first real test for our innovative pH sensor and so far we are extremely pleased with its performance. We are now looking forward to seeing how well it will perform at sea, with all the challenges that brings. Making it through to this stage shows that our technology is world-class, demonstrating huge potential for autonomous pH observations in the near future.”

The teams will find out in March if their sensors will advance through to the fourth and final round of the competition. Phase 4 will include deep-sea trials in the Pacific Ocean off the coast of Hawaii where devices will be put through real-world depth and pressure scenarios.

The winners of the Wendy Schmidt Ocean Health XPRIZE will be announced at a gala event in the USA in July.