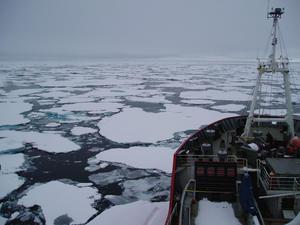 Using recently released Royal Navy submarine data, researchers at the National Oceanography Centre (NOC) have investigated the nature of turbulence in the ocean beneath the Arctic sea-ice.

Recent decreases in Arctic sea ice may have a big impact on the circulation, chemistry and biology of the Arctic Ocean, due to ice-free waters becoming more turbulent. By revealing more about how these turbulent motions distribute energy within the ocean, the findings from this study provide information important for accurate predictions of the future of the Arctic Ocean.

NOC scientist and lead author of this research, Charlotte Marcinko, said “By investigating the nature of turbulence under sea ice, we can begin to understand how the circulation of the Arctic Ocean is likely to change as it becomes more ice-free during the summer.”

The melting of Arctic sea-ice is expected to be accelerated as the cold, fresh layer of water just beneath the ice mixes with a relatively warm, salty layer below it. This mixing is caused by turbulent motions, such as internal waves and eddy currents, which are likely to increase as the sea-ice thins and breaks up, causing a positive feedback effect.

Turbulence also plays a key role in the ocean circulation, linking currents spanning ocean basins to others spanning just millimetres. The wind is a major factor in driving these ocean currents, but in the Arctic sea-ice can shield the ocean from it. However, this lid of sea-ice also makes it difficult for scientists to investigate what is happening in the ocean currents beneath. As a result currently little is known about turbulence in oceans covered in sea-ice, and how these processes might change in future.

Submarines are equipped with sensors that collect various ocean measurements, including temperature and salt content. Due to the sensitive nature of submarine environmental data collection, MoD approval for access to a relevant dataset has only recently been given to the scientists at the NOC.

The study, published in the Journal of Geophysical Research Letters, shows that there are differences in the way energy is distributed by turbulent motions in the Arctic when compared to open, ice-free seas. Findings showed that the nature of turbulence was very similar in Arctic regions with high and low amounts of sea-ice. This suggests that the nature of turbulence in the Arctic is altered by the way sea-ice affects the structure and stability of the water column, rather than just by the ice acting as a lid protecting the ocean from the wind.

This research was conducted by a team of scientists at the National Oceanography Centre and the University of Portsmouth. It forms part of the Arctic Research Programme, a £15m programme to enhance the UK’s research effort in the Arctic, funded by the Natural Environment Research Council (NERC).