Study begins on air-sea exchanges and their influence on climate 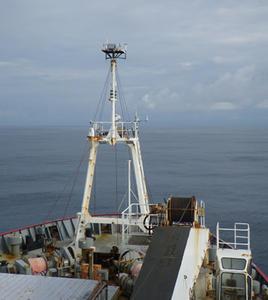 The exciting thing about WAGES is that it will obtain two years of data over the entire length of the Atlantic under a vast range of different conditions.

A two-year project, which will provide vital information on the interaction between the ocean and the atmosphere and its influence on climate, begins this month.

Scientists at the National Oceanography Centre (NOC), University of Leeds, and the British Antarctic Survey (BAS) are collaborating on the ‘Waves, Aerosols and Gas Exchange Study’ (WAGES), which begins this month with the installation of an autonomous air-sea flux system, ‘AutoFlux’, on the Royal Research Ship James Clark Ross, operated by BAS. The Autoflux makes continuous direct measurements of the air-sea exchange of carbon dioxide, sea-spray aerosol, heat, moisture, and momentum.

WAGES is a joint scientific project between the NOC, led by Dr Margaret Yelland and Professor Meric Srokosz, and the University of Leeds, led by Dr Ian Brooks. BAS is providing technical and logistical support.

“Sea spray aerosol is important for cloud formation, and the exchange of carbon dioxide and other gases between the sea and the atmosphere has an important impact on climate,” explained Margaret Yelland.

“These exchanges are not well understood, but are thought to depend on the type of waves that are present on the sea surface. For example, it may be that short steep waves produce more wave breaking and hence more gas transfer and aerosols than less steep waves. Similarly, wave breaking may be influenced by the sea surface temperature or the air-sea temperature difference,” added Ian Brooks.

Summer 2010 will see a commercial wave radar system added to obtain information on wave direction, along with digital cameras to image whitecap coverage. All systems will remain on the RRS James Clark Ross until at least the autumn of 2012. 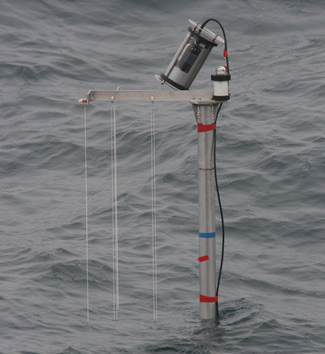 In addition to the continuous flux and wave measurements, there will be a number of cruises during which WAGES personnel will deploy a spar buoy to obtain data on wave breaking. An aerial camera system will be flown by kite to obtain simultaneous wide-area whitecap coverage.

WAGES aims to continue and expand the work begun under three UK-SOLAS (Surface Ocean Lower Atmosphere Study) projects of limited duration or scope. Previous projects SEASAW and DOGEE only made measurements during relatively short research cruises, while HiWASE made three years of measurements from the weather ship Polarfront stationed at a single location in the North Atlantic.

“The exciting thing about WAGES is that it will obtain two years of data over the entire length of the Atlantic under a vast range of different conditions,” said Margaret Yelland. “Measurements will be taken in sea-ice covered areas of the Antarctic and Arctic, the extreme seas of the Southern Ocean, the high temperatures of the equatorial Atlantic, and during the fierce storms of the North Atlantic.”

WAGES is funded by the UK’s Natural Environment Research Council.