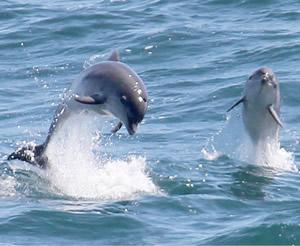 The 2010 SeaWatch Southwest survey has just begun, with a team of dedicated scientists and volunteer observers braving recent stormy weather to record some of the spectacular marine life around southwest UK. The project is co-ordinated by Dr Russell Wynn of the National Oceanography Centre (NOC) in Southampton.

The survey team are based at Gwennap Head, near Land’s End at the southwest tip of the UK mainland, and are watching from dawn-to-dusk between 15 July and 15 October.

The first day of the 2010 survey saw the survey team battered by a severe summer storm, with 61 mile per hour gusts and several hours of heavy rain. However, the unsettled conditions produced a large influx of seabirds, and in the last six days the observers have been rewarded with totals of 15,000 Manx Shearwaters, 55 Puffins and over 250 Balearic Shearwaters passing the Gwennap Head watchpoint. The latter species is Europe’s only Critically Endangered seabird, but has been visiting southwest UK in increasing numbers in recent years.

Other sightings have included Basking Sharks feeding just metres from the shore, several Ocean Sunfish drifting by, Harbour Porpoises glimpsed amongst the waves (including a mother-and-calf pair), and up to 11 Grey Seals hauled out on nearby rocks. However, the highlight has been a pod of at least 11 Bottlenose Dolphins that have provided spectacular acrobatic displays on a daily basis. This species has declined off southwest UK in recent years, but encouragingly the pod has three healthy calves in tow.

One of the main aims of the survey is to highlight the importance of rocky reefs and tide races as biodiversity hotspots, where marine animals congregate to feed. The Gwennap Head watchpoint overlooks Runnelstone Reef, and a feeding frenzy of several hundred gannets, gulls and shearwaters (including several Balearic Shearwaters) has been noted over the reef margin in recent days.

“Detailed observations from biodiversity hotspots such as Gwennap Head are helping us to better understand the habitat requirements of vulnerable species, including Harbour Porpoises, Basking Sharks and Balearic Shearwaters,” said Russell Wynn. “We hope that by collecting high-quality data from these hotspot areas we will be able to inform future conservation action in the region.”

The SeaWatch SW survey is scheduled to run from 15 July to 15 October between 2007 and 2011. The fieldwork is supported by a number of organisations, including Total Foundation, Royal Society for the Protection of Birds (RSPB) and British Trust for Ornithology (BTO).

The first three years of the survey have generated almost 3000 hours of detailed observations from Gwennap Head, supported by data from other regional watchpoints such as Berry Head in Devon, Trevose Head in Cornwall and Strumble Head in Pembrokeshire. Boat-based observations from the western English Channel are collected by project partners at Marinelife, and provide an important offshore perspective.