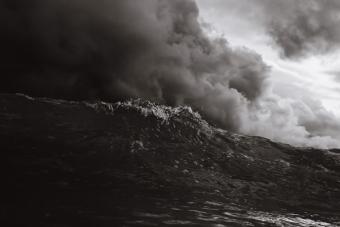 Fast moving storms can cause catastrophic coastal flood hazards on the UK’s east coast, according to new research by scientists at the National Oceanography Centre (NOC).

Published in the journal Ocean Modelling, this research used computer programs to analyse the travelling speed of storm Xaver, which was responsible for generating the highest storm surge in the North Sea in the last 60 years. The study found the fast travelling speed of Xaver was an important factor in the consequent coastal flood.

The lead author of this research, Dr Xiaoyan Wei from the NOC, said “We tend to think slower storms should cause greater flood hazards because they act on the sea surface for a longer period of time, and as a result set up a higher surge. But, our research shows that fast-moving storms can actually cause much higher water levels if resonance takes place.”

"This study focused on the UK east coast, but I hope the outcomes of this research will help improve coastal flood hazard assessments worldwide for communities living around semi-enclosed coastal seas.”

Importantly, the rise in sea level due to wind ‘whipping’ up the sea was the main contributor to storm surges on the UK’s east coast during Xaver. This effect is strongly dependent on water depth, fetch (the area of sea that wind can blow over), and wind duration.

Storm surge, when coinciding with strong tides, can result in catastrophic coastal flood hazard. But, at coasts with a large tidal range the storm surge and tide can interact in a way that decreases the maximum water level, reducing the potential flood hazard. The UK southeast coast is particularly vulnerable because not only does it have a low tidal range, but it is also fronted by a long stretch of shallow sea, over which the wind can ‘whip-up’ the sea level.

This research forms part of the National Oceanography Centre’s commitment to advancing knowledge that helps protect people and property from natural hazards.

This research was funded by the Natural Environmental Research Council (NERC) project, BLUEcoast.