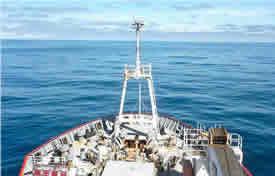 Last month the RRS James Clark Ross set sail in the direction of the Antarctic Peninsula and the Northern Weddell Sea to measure the production of Antarctic Bottom Water. Onboard ship is an international team of young scientists who are contributing to a blog diary about their work and experiences during the expedition.

Dr Mike Meredith of the British Antarctic Survey is leading this part of the expedition. He said, “Antarctic Bottom Water exits the Weddell Sea and spreads across the world's oceans. Pretty much everywhere, the water near the bottom of the ocean can be traced back to Antarctica. We are keen to learn more about the qualities of this water at the beginning of its journey around the globe.”

During the first leg of the journey the scientists will seek to obtain measurements of temperature, salinity, velocity and a range of chemical and biogeochemical substances along the Weddell Sea’s outer rim. The second leg, which starts from inside the Weddell Sea and goes north to South Georgia is a section that the British Antarctic Survey intends to repeat annually.

Read more information and the blog on the Classroom@Sea Page.