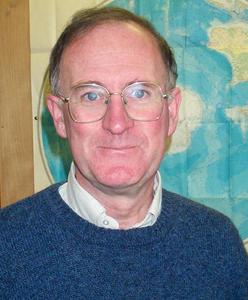 Professor Harry Bryden of the University of Southampton’s School of Ocean and Earth Science (SOES) based at the National Oceanography Centre, Southampton has been elected a Fellow of the American Geophysical Union (AGU) in recognition of his outstanding contributions to the Earth sciences.

The award ceremony was held this week during the AGU Fall Meeting in San Francisco, where Prof. Bryden was a guest at the Honors Banquet.

Since its inception in 1919, the AGU has played an important role in advancing the geophysical sciences, often through international scientific collaborations. Only eminent scientists who have made exceptional contributions to the field are nominated for Fellowships, and new Fellows are chosen by a Committee of Fellows.

Professor Tim Minshull, Head of SOES, said “I am delighted that Harry has been elected a Fellow of the AGU. It is a great tribute to him to have his research recognised in this way.”

Professor Bryden is a member of the University’s School of Ocean and Earth Science (SOES) based at the National Oceanography Centre in Southampton. He graduated from Dartmouth College, USA (1968) and was awarded his PhD (1975) jointly by Massachusetts Institute of Technology (MIT) and Woods Hole Oceanographic Institution (WHOI). Before moving to the UK, he held positions with the US Naval Oceanographic Office, the US Naval Underwater Sound Laboratory, MIT, WHOI and Oregon State University. He was also a Visiting Scientist at the School of Oceanography, University of Washington (1981–2), and a Visiting Fellow of Wolfson College, University of Oxford (1988–9).

His election as a Fellow of the AGU adds to a long list of other awards and accolades achieved during his scientific career. In 2003, he was awarded the Stommel Medal and became a Fellow of the American Meteorological Society. In 2005, he was elected a Fellow of the Royal Society. He was the recipient of the 2009 Prince Albert I Medal of the International Association for the Physical Sciences of the Ocean, awarded in recognition of his fundamental contributions to understanding the ocean's role in the global climate system.