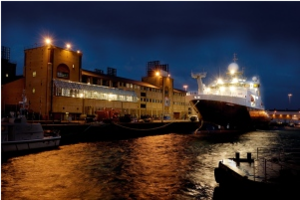 Industries and universities have a vital role to play collaborating together to achieve sustained economic growth, Southampton has long been a centre of excellence for the marine industry so it is a fitting home for this new Institute.

Universities and Science Minister David Willetts has hailed the new Southampton Martine and Maritime Institute (SMMI), of which the National Oceanography Centre is a component, as exemplary of the relationships required between industry and higher education to drive future economic growth in the UK and around the world.

The creation of the SMMI has been stimulated by the University’s ever strengthening relationship with LR over the last 40-plus years. The Institute will eventually be located on premises alongside LR in Southampton on the redeveloped Boldrewood Campus of the University, due for completion in 2014. This development has resulted in an investment of around £116M in the new campus, the largest such business-focused endeavour in any UK university.

“Industries and universities have a vital role to play collaborating together to achieve sustained economic growth,” said Mr Willetts. “Southampton has long been a centre of excellence for the marine industry so it is a fitting home for this new Institute".

“The world leading R&D that will be carried out at the Southampton Marine and Maritime Institute will be key to maintaining the industry’s first-rate international reputation. We want to see more of examples of this kind of collaboration, which is why we announced a £100m fund in the Budget to help universities attract private sector and charity partners.”

Professor Nutbeam added “This is one of those occasions when we can celebrate what is a most unique association between ourselves and Lloyd’s Register - a fantastic ally with the University over more than 40 years. It’s through the trust built over decades of co-operation that we’ve embarked upon this project, which really has no parallel in terms of its scale and ambition. Both of us hope that the creation of the Southampton Marine and Maritime Institute and the development of the joint campus will be a hub for collaborations that run internationally. The SMMI will be a magnet to attract other partners onto our campus, to draw upon our fantastic research and development capabilities and the fantastic future resource represented by our students.”

Tom Boardley, Marine Director for Lloyd’s Register said “Collaborative initiatives such as the SMMI and our Group Technology Centre are clearly the way forward for British industry. When you combine the strengths of business and academia for research purposes, you stimulate the kind of practical innovation that supports sustainable industry. It is strategic technical alliances like these that will ensure our shipping and energy sectors have the solutions they need to remain safe, environmentally responsible and globally competitive.”

With approximately 300 academics working together with society, industry and government, the SMMI will be the largest single entity of its kind in the world which integrates all marine and maritime disciplines across the University. Specialists in ship design and naval architecture, fluid dynamics and acoustics, oceanography through to arts, humanities and social sciences will work together to better understand current and future maritime challenges.

The co-location of LR with the University and its collaboration with the SMMI will help to ensure research support for these sectors, which will influence and catalyse future maritime developments at regional, national and international level enabling wealth creation, strategy and policy formulations, new research and enterprise initiatives, and graduate employment opportunities for the region’s highly skilled and desirable work force.

Close links with LR will be supplemented by collaborative frameworks with other UK industrial and societal organisations and government establishments. These close links will be vital to the long term success of the SMMI.

Professor Ajit Shenoi, Director of the SMMI, concluded “The SMMI at Southampton will be a unique, internationally-recognised centre of excellence, bringing together a research, innovation and education community from universities, research institutes, industry and governments. It is envisaged that the Institute will be a catalyst for ground-breaking inter-disciplinary research and development of great significance to industry and society related to the maritime sector.”