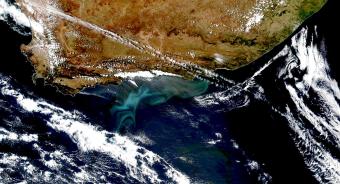 AI is commonly associated with facial recognition, and self-aware robots, but it is a powerful scientific tool that is vital for ongoing scientific research

In a ground-breaking study, scientists from the National Oceanography Centre (NOC) have used Artificial Intelligence (AI) to connect ocean physics and biology, to understand the effects of the Agulhas Current near South Africa on the productivity of upwelling regimes.

Upwelling is the uplift of deep nutrient rich water to the surface, a process that sustains commercial fisheries.

The study, recently published in Frontiers in Marine Science, applied unsupervised machine learning, a form of AI, to 23 years of daily satellite observations, including sea surface temperature, chlorophyll-a and surface current measurements to reveal Agulhas Current flow patterns and changes over time. The study revealed four key modes of the Agulhas Current, which affect levels of phytoplankton on the Agulhas Bank, and therefore the productivity of the ecosystem.

The Agulhas Bank, a broad, shallow part of the southern African continental shelf, contains one of the most productive ecosystems in the global ocean and is home to diverse marine life, vital for local economic stability and food security. Phytoplankton are an important component of this ecosystem, lying at the base of the food chain, sustaining rich and productive fisheries.

Analysing the dynamics of these ecosystems can be challenging using traditional statistical methods especially in oceanographically complex coastal regions, such as the Agulhas Bank. Innovations in technology have enabled AI models to deal with larger amounts of data, connecting different aspects of ocean research and obtain results faster and more efficiently than ever before. In this case, AI has enabled NOC scientists to pick out key patterns from a large dataset, to understand which types of flow correspond to productive regimes and which are responsible for reduced levels of productivity. This information can be used to inform local fisheries and the communities dependent on them socio-economically, to help ensure their sustainability.

Dr Fatma Jebri, Research Scientist at the NOC, and lead of the study said: “AI is commonly associated with facial recognition, and self-aware robots, but it is a powerful scientific tool that is vital for ongoing scientific research. Currently used in research for medicine and finances, it is now increasingly being used more and more to explore our oceans and can be very useful for climate change and biodiversity related studies.”

“Large amounts of data from satellite observations can traditionally be difficult to examine and analyse. Technological developments have enabled AI models to deal with larger amounts of data, connecting different aspects of ocean research (here biology and physics) and obtain results faster and more efficiently than ever before. In this case, we applied the Self Organising Maps model, a machine learning algorithm, to sift through the large amounts of satellite Earth observation data, which enabled it to learn and pull out the dominant patterns and how they may be changing over time.”

This study was conducted as part of the SOLSTICE (Sustainable Oceans, Livelihoods and food Security Through Increased Capacity in Ecosystem research in the Western Indian Ocean) project, funded by the UK Global Challenges Research Fund (GCRF).

Read the paper in Frontiers in Marine Science