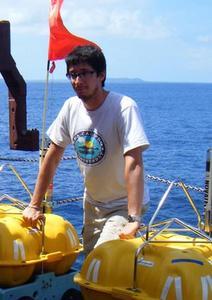 I am flattered and very happy to have been awarded the President’s award.

Michele Paulatto, a PhD student at the University of Southampton’s School of Ocean and Earth Science (SOES) based at the National Oceanography Centre, Southampton, has been awarded one of the Geological Society’s President’s Awards for 2011.

Two or three of these accolades are awarded annually to young researchers of exceptional promise and ability in the Earth sciences, and are the gift of the President of the Geological Society of London, the main body that represents professional and academic Earth scientists in the UK.

Michele, who has been supervised in Southampton by Professor Tim Minshull and Dr Tim Henstock, is a member of the Geology & Geophysics Group at the National Oceanography Centre, Southampton, and specialises in the fields of marine geophysics, seismology, and natural hazards.

He has recently submitted his PhD project, entitled ‘Probing the interior of an active volcano: three-dimensional seismic tomography at Montserrat’, which determining the seismic velocity structure of the island of Montserrat, with a particular focus on the location, size and composition of the magma system feeding the active Soufriére Hills Volcano. Michele collected the data for this project in December 2007 during the Natural Environment Research Council (NERC) cruise JC19, as part of the joint UK-US SEA-CALIPSO project.

Michele comments “I am flattered and very happy to have been awarded the President’s award. A lot of the merit, and my sincere thanks, go to my exceptional supervisors and to the School for the great support I received in Southampton.”

The award is especially noteworthy since it is usually made to postdoctoral-level researchers or lecturers.

“I congratulate Michele on this excellent achievement,” says Professor Tim Minshull, Head of the School of Ocean and Earth Science. “This award reflects Michele's hard work sustained throughout the duration of his PhD, and the high calibre of PhD projects being undertaken at the National Oceanography Centre, Southampton.”