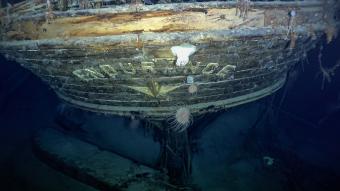 Earlier this week came the exciting news that the wreck of the Endurance, Sir Ernest Shackleton’s ship, which has not been seen since it sank in the Weddle Sea in 1915, had been found as part of the Endurance22 expedition.

It’s been reported by The Falklands Maritime Heritage Trust that the ship was found at a depth of 3008 metres in the Weddell Sea, within the search area defined by the expedition team before its departure from Cape Town, and approximately four miles south of the position originally recorded by Captain Worsley.

Discussing the recent discovery of The Endurance, the lost vessel of Sir Ernest Shackleton, Meric Srokosz, Professor of Physical Oceanography at the National Oceanography Centre, said: “The news that The Endurance has been found is remarkable. As a significant piece of the Antarctic exploration story, locating the ship and the site of the shipwreck is a major achievement. Shackleton is one of the greatest legends of exploration history, and the mission to uncover The Endurance is possibly the world’s most challenging shipwreck search.

“The conditions in the Weddell Sea can provide an explanation as to why The Endurance has been found extremely well preserved in the state it was when it was photographed for the final time before slipping beneath the sea’s surface. The current speeds at depths of 3km in the Weddell Sea are very low, so it is unlikely to have experienced the sort of forces needed to break it apart once it reached the seabed.

“Also, the very cold waters at depth inhibit the sort of biological activity that would typically affect the ship’s timbers. If you think of a tree falling in a forest, it quickly begins to rot and organisms grow on it, but the temperatures in the depths of the Weddell Sea are around −1°C to 0°C so any deterioration due to biological activity would be slight in comparison.”

Last month, in the lead up to the expedition, The NOC’s Dr Brian King featured on the first episode of the brand-new History Hit Live series, sharing his expertise on Antarctic weather conditions to aid the expedition.