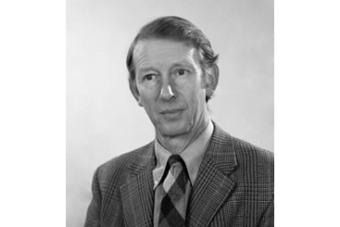 It is with sadness that the National Oceanography Centre has learned that Sir Anthony Laughton FRS died peacefully at home on 27 September 2019 after a short illness; he was 92. Sir Anthony was Director of the UK’s Institute of Oceanographic Sciences (a predecessor to the NOC) based at Wormley from 1978 to 1988.

Sir Anthony (Tony) Laughton was educated at Marlborough College and Cambridge University where he took his MA and PhD. After the award of his PhD on the compaction of marine sediments, he moved to the Lamont Geological Observatory of Columbia University in New York, before joining the National Institute of Oceanography (NIO) in 1955.

At NIO, starting with the development of a deep-sea camera and generating contour charts of the ocean floor, he soon built up a marine geology and geophysics group. Expeditions to the Atlantic and Indian Oceans on RRS Discovery contributed greatly to the understanding of seafloor spreading and plate tectonics.

Between 1969 and 1977, he led expeditions using the sonar system GLORIA (Geological Long-Range Inclined Asdic), developed at NIO, to study seafloor features including fractures along the Mid Atlantic Ridge. He initiated the UK’s participation in the Deep Sea Drilling Project and was also committed to the international global ocean charting project GEBCO (General Bathymetric Chart of the Oceans).

He became Director of the Institute of Oceanographic Sciences (the successor institution to NIO) in 1978. After retiring in 1988, he became President of the Challenger Society for Marine Science (1988–90), and later of the Society for Under Water Technology (1995–97), and served on the Council of the Marine Biological Association in Plymouth. He was a Trustee of the Natural History Museum (1990–95) and was elected President of the Hydrographic Society (1997–99).

Sir Anthony received numerous awards, including the Prince Albert I of Monaco Gold Medal for Oceanography (1980), the Royal Geographical Society’s Founders Medal (1987) and the Murchison Medal of the Geological Society of London (1989). Elected a Fellow of the Royal Society in 1980, he served on its Council (1986–87). In 1987 he was knighted for services to oceanography.

In July 2019 he was awarded an honorary Doctorate of Science by the University of Southampton for his pioneering work in marine geology.

Sir Anthony had an interest in the history of oceanography and, along with John Gould, Howard Roe and Tom Tucker, edited the book ‘Of Seas and Ships and Scientists: The Remarkable History of the UK’s National Institute of Oceanography, 1949–1973’.

Sir Anthony was interviewed for the British Library’s ‘Voices of Science’ and his voice recording can be found online.

Our thoughts are with his family at this time.