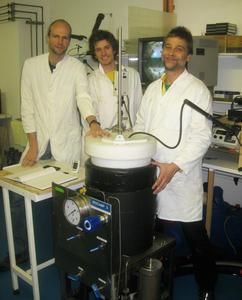 We have demonstrated that P. varians can tolerate temperatures and pressures similar to those experienced by their deep-water cousins living around hydrothermal vents

By studying the tolerance of marine invertebrates to a wide range of temperature and pressure, scientists are beginning to understand how shallow-water species could have colonised the ocean depths.

Scientists believe that climate changes at various at various times during Earth’s history caused extinctions of creatures living at bathyal (1,000–4,000 metres) and abyssal (>4,000 m) depths. These extinctions were apparently followed by re-colonisation of the deep sea by shallow-water species, which subsequently evolved into the species well adapted for life in this new challenging environment.

“Many deep-sea species have close relatives living in shallow, relatively warm water, but how shallow-water species were initially able to cope with the huge hydrostatic pressures of the deep ocean is poorly understood,” explained Dr Sven Thatje of the University of Southampton’s School of Ocean and Earth Science (SOES) based at the National Oceanography Centre, Southampton.

Another potentially obstacle to vertical migration from the surface to the deep ocean is that of temperature. Most shallow-water species alive today are used to living in relatively warm water rather than the frigid temperatures of the deep sea. One possibility is that re-colonisation occurred during geological periods when deep-sea temperatures were warmer. Alternatively, species living in the colder waters of polar regions may have been pre-adapted to life in the deep sea.

To address these issues experimentally, Thatje and his collaborators turned to a model species, the variable shrimp (Palaemonetes varians).The species is native to Western Europe and lives in shallow, brackish habitats. It tolerates low oxygen conditions and wide fluctuations in temperature and salinity, and has potential for commercial aquaculture.

“P. varians is closely related to deep-sea shrimp species living around hydrothermal vents – ‘black smokers’ – in the Atlantic, making it an excellent case for comparison with these deep-living shrimps,” said Andrew Oliphant, lead author and PhD student at the graduate school at the National Oceanography Centre, Southampton.

The researchers collected variable shrimps from Lymington salt marshes (England) and from Bay of Mont Saint Michel (France) and acclimated them to life in the laboratory. They then tested the ability of adult shrimps to withstand the effects of various pressure and temperature combinations, measuring both oxygen consumption and behaviour.

The water temperature experienced by variable shrimps in their natural habitats varies seasonally, dipping to around 0°C in the winter, with a summer high of around 30°C. The researchers found that the shrimps were more sensitive to pressure at lower temperatures. Nevertheless, at all temperatures between 5 and 30°C the shrimps tolerated hydrostatic pressures far beyond what they would experience in shallow water.

The highest pressure tested was 30 megapascals (MPa), which is equivalent to approximately 4,351 pounds per square inch or 3,000m water depth. For comparison, in their natural habitat, variable shrimps live at a hydrostatic pressure of around 0.1 MPa equalling atmospheric pressure.

“We have demonstrated that P.varianscan tolerate temperatures and pressures similar to those experienced by their deep-water cousins living around hydrothermal vents,” said Dr Thatje. “These physiological capabilities were probably inherited from an ancestral species shared by both shallow-water and related vent species.”

The research was supported by the Total Foundation.