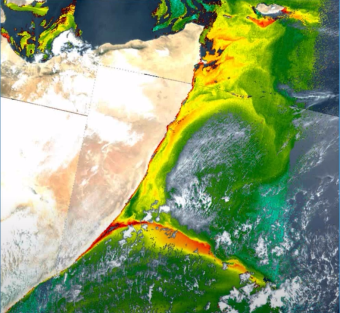 Scientists from the National Oceanography Centre (NOC) have developed a new method to monitor the effects of climate change on coastal upwelling to support the growth of local fisheries in Somalia.

As part of the NOC’s SOLSTICE project, the new methodology uses machine learning systems to automatically detect coastal upwelling in the Somali Current, one of the strongest upwelling systems in the Indian Ocean. Prior to this, fisheries have had to rely on traditional fishing practices, but the new method will enable them to see when the highest levels of fish productivity are likely to take place, helping to form a sector-wide strategy that increases the efficiency of operations within the fishing community.

By using a machine learning approach, NOC scientists were able to propose an ‘Upwelling Watch’ analysis, which will produce updates and alerts on upwelling presence and extremes to form the basis for appropriate management of fisheries along the coast of Somalia. Up until now, there has been limited data available to assess how to navigate these changes whilst still operating a thriving fisheries sector.

Over 100 million people in the Western Indian Ocean region live within 100km of the coast, with over one million working in the fisheries sector. This region is highly dependent on the ocean for economic stability, food security, and social cohesion. In recent years, the region has seen dramatic reductions in key fisheries, with two of the causes being climate change, and natural ecosystem variability.

In contrast to eastern boundary upwelling systems, the Somali Current is an upwelling system that reverses its direction annually, due to the seasonally reversing monsoon winds. Between June and September, the monsoons play an important role in this region’s ecology by elevating nutrient concentration in the upper surface layer of the ocean, making it one of the most productive marine ecosystems in the world. This oceanographic process is known as coastal upwelling, in which cold, nutrient-rich waters are brought to the ocean surface, helping to form the foundation of ecological systems and the fisheries that are dependent on them.

Dr Matthew Hammond, Satellite Oceanographer at the National Oceanography Centre, said: “Due to the climate crisis, these upwelling systems are changing, with elements such as faster winds causing an increase in upwelling systems. Another element is ocean warming, with increasing temperatures causing low levels of productivity. Combined, this has disastrous implications on these communities by decimating fish stock.

Dr Hammond continued: “Using satellite acquired data, the NOC is now able to provide information on the affect that climate change has on the Somali upwelling, by detecting variability in upwelling systems and the impacts it has on the movement of fish. Because climate models are now sufficiently advanced to assess what may happen if large quantities of carbon dioxide keep entering our atmosphere, we can use them to understand what may happen to the Somali upwelling.”