Scientists spend Christmas in the Southern Ocean for climate research 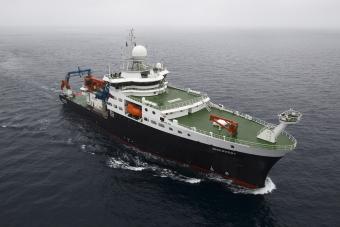 On Monday 2 December, National Oceanography Centre (NOC) scientists, engineers and crew will embark on a research expedition that will see them spend Christmas and New Year sailing through remote waters in the Southern Ocean on board RRS Discovery.

This is part of an exciting project, led by the NOC, to understand the role of this notoriously rough part of the ocean in taking up and storing carbon from the atmosphere. The team will largely be focusing on studying the seasonal growth of tiny marine plants, called phytoplankton.

Annual phytoplankton growth equals that of all land plants combined. Without life in the sea, carbon dioxide concentrations in the atmosphere would be 50% higher. The festive season in the northern hemisphere is actually mid-summer in this rarely visited part of the ocean, so marine plants will be blooming.

Importantly, when these plants die, the carbon held within them moves deeper into the ocean, some in the stomachs of crustaceans and fish that eat them, or by sinking as ‘marine snow’. This expedition aims to address some of the uncertainty around how this process happens. In particular, they will be looking at the consequences of phytoplankton becoming starved of nutrients as their population outstrips supply. This can change the variety and health of species present, affecting how quickly marine snow sinks

NOC scientist and CUSTARD project lead, Dr Adrian Martin, said “The movement of carbon into the ocean is particularly important in the Southern Ocean, since it is effectively a ‘motorway junction’ for ocean currents. Which motorway the carbon enters determines how long it will remain ‘locked’ away in the ocean. If shallow, maybe a year or less, if deep, possibly hundreds years or longer.”

The information collection during this expedition will by complemented with year-round data from two marine robotic vehicles called ‘gliders’, as well as a moored buoy provided by a US Ocean Observatories Initiative. This enables the study of seasonal change, similar to observation of meadows flowering and dying over the year, even during the winter months with Southern Ocean waves as high as a four-storey house.

This expedition is part of the CUSTARD (Carbon Uptake and Seasonal Traits in Remineralisation Depth) project, which studies the ‘biological carbon pump’. CUSTARD is funded by the Natural Environmental Research Council (NERC), and forms part of the NOC’s commitment to furthering knowledge about the relationship between the oceans and climate.

CUSTARD is part of the NERC Role Of the Southern ocean in the Earth System (ROSES) programme, and involves collaborators from the Universities of Southampton, Plymouth, East Anglia and Oxford, and the British Antarctic Survey (BAS) in the UK, as well as the Max Planck Institute for Meteorology in Germany and Woods Hole Oceanographic Institute (WHOI) in US. In addition, the project is also assisted by the US National Science Foundation (NSF) through the US Ocean Observatories Initiative.

Once the expedition begins, scientists on board will be blogging about their research, and Christmas at sea. View the blog here.