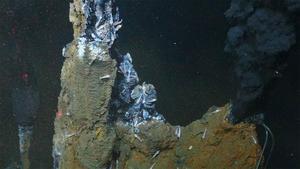 A crucial process has been identified to explain the reason why dissolved organic carbon (DOC) levels in the deep oceans are constant despite a continuous supply from the surface ocean. This research has been published today in the journal Nature Geoscience and was conducted by scientists from the National Oceanography Centre (NOC) and The University of Southampton.

Dr Jeff Hawkes, NOC, the lead author of this study, said: “There has been a long outstanding question about whether hydrothermal vents are a source or sink of organic carbon to the oceans. We have shown that hydrothermal vent fluids contain almost none of the organic carbon which accumulates in the oceans, which means that vents are a sink for this unreactive ‘stored’ carbon.”

The pool of dissolved organic carbon (DOC) in the oceans is as large as all of the carbon in the atmosphere. Phytoplankton, which remove CO2 from the atmosphere and convert it into more complex carbon compounds, are the primary source of DOC in the ocean. Deep ocean DOC concentrations are almost constant throughout the world’s oceans and are thought to be resistant to biological breakdown. However, with the continuous DOC supply from the surface oceans, concentrations in the deep sea are not increasing.

Co-author, Dr Doug Connelly, NOC, said “This work finally gives us a mechanism for the deep ocean carbon cycle, addressing the long standing problem of why the DOC in the world’s oceans is not increasing.”

This study highlights the importance of deep ocean water circulation through hot hydrothermal systems as one of the main removal processes in this environment balancing the supply. The vent systems convert the biological resistant long-lived carbon into more readily available carbon, which organisms can then use.

This research was partly based on seafloor sampling at hydrothermal vent sites using the NOC maintained robotic vehicle Isis, which was launched over the side of the RRS James Cook. These vent sites where situated in the Caribbean and Antarctica, and included the Von Damm and Beebe sites.

Eight academic institutions world-wide contributed data from other vent sites to this study. The field work was complemented with high-temperature high-pressure experiments in the laboratory to replicate the hydrothermal observations and to suggest mechanisms for the processes.

Co-author Professor Eric Achterberg, University of Southampton, said “The beauty of this approach is that with both field and laboratory experiments we were able to prove how the mechanisms operate for the removal of organic carbon in the deep ocean.”

This research was funded by the Natural Environmental Research Council (NERC) and forms part of the NOC’s ongoing research into deep sea processes.