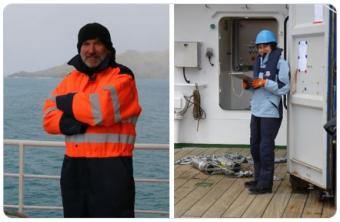 Over 40 representatives from the UK’s National Oceanography Centre (NOC) will discuss key ocean issues at Europe’s largest and most prominent geoscience event, the EGU Assembly 2021 (held virtually from 19–30 April)

The presentations from NOC explore issues from understanding our climate and observing glaciers, to sea level rise and the future of the Indian Ocean.

Two of the NOC’s scientists, Dr Marilena Oltmanns and Professor Richard Lampitt, will receive awards for their ground-breaking work, which are being presented at this year’s EGU Assembly. On 22 April, Professor Lampitt will be given the ‘Fridtjof Nansen Medal’, established by the Ocean Sciences division of the conference, which is awarded for distinguished research in oceanography.

Professor Lampitt’s work looks at the processes of downward particle flux in the ocean using data which has been collected from the sustained observatory over the Porcupine Abyssal Plain (PAP-SO) in the Northeast Atlantic and has provided continuous measurements of downward particle flux at a depth of 3,000m since 1989. Simultaneously to these time-series observations progressing, major new developments have taken place globally and at PAP-SO to provide new ways to assess this flux. The new approaches include using Biogeochemical (BGC) profiling Argo floats, the Carbon Flux Explorer and a variety of other optical techniques which will build a better understanding of the downward particle flux and how it is changing in response to global climate change.

Dr Oltmanns will receive the ‘Ocean Sciences Division Outstanding Early Career Scientists Award’ which recognises scientific achievement made by an Early Career Scientist in the division related to ocean sciences. Dr Oltmanns’ research focuses on physical feedback mechanisms between the atmosphere, North Atlantic ocean, and Arctic ice loss and the effect of these feedbacks on the North Atlantic climate.

Professor Douglas Connelly, Associate Director of Research at NOC said: “We are delighted to have so many representatives from the NOC speaking at this years’ EGU Assembly including seeing two medal winner scientists be recognised for their significant contributions to ocean sciences. It is a true celebration of our team’s diverse expertise as world leading ocean and marine scientists. The assembly creates a wonderful opportunity for young PhD scientists and established researchers alike to participate and share their areas of expertise throughout the event.”

The virtual event will see scientists present their work to a global audience. The full list of presentations from NOC Scientists can be found at: https://noc-events.co.uk/noc-presence-egu-general-assembly-2021