Scientists to measure impact of volcanic ash on ocean biology 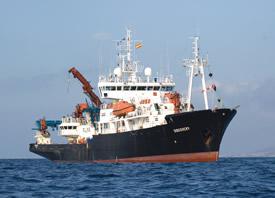 A team led by scientists from the National Oceanography Centre, Southampton, have today set sail from Govan in Scotland towards the region of the North Atlantic ocean affected by ash from the Icelandic volcano eruption to investigate potential impacts on ocean biology.

In many regions of the ocean the productivity of microscopic plants, called phytoplankton, that form the base of the marine food web and sequester carbon dioxide from the atmosphere, is limited by the availability of the ‘micronutrient’ iron, which is essential for their growth. On a previous cruise, a group of scientists from NOCS demonstrated that the high-latitude North Atlantic Ocean might be one such region. Consequently biological productivity and ultimately the carbon cycle might be sensitive to any changes in iron inputs in the region.

The study region typically receives very low atmospheric dust inputs. However, the recent eruption of the Icelandic volcano Eyjafjallajökull is potentially supplying large amounts of ash particles to the surface ocean near Iceland. Volcanic ash is thought to be capable of providing a significant source of iron for phytoplankton. Consequently, the eruption of the volcano has provided an unexpected opportunity to study a ‘natural experiment’ where the system has potentially been shifted from the normal iron limited condition. The team will thus have a once in a life time opportunity to establish whether volcanic ash levels in the marine atmosphere can influence the chemistry and biology of seawater in the North Atlantic.

The international team, which includes scientists from the University of Portsmouth, the University of Cape Town and the Natural History Museum, were already planning on visiting the region this spring on a cruise aboard the RRS Discovery. The research vessel is equipped with instrumentation to sample for atmospheric dust, and nutrients (including iron) in the seawater, alongside measuring the activity of the phytoplankton community.

While the additional iron inputs by the volcanic ash may serve to stimulate the biological productivity, it is also conceivable that other elements supplied by the ash may be detrimental to parts of the phytoplankton or bacterial community. The team will investigate this by monitoring the biological response when collected volcanic ash particles are added to seawaters in experiments performed on the ship.

The team is scheduled for a stop-over in Reykjavik on May 10 and then to return to the UK on May 28.

A second planned cruise to further establish how iron availability influences upper ocean biology in the region in the summer (July–August 2010), will provide an additional opportunity to investigate the effects of the Eyjafjallajökull ash inputs on the chemistry and biology of the high-latitude North Atlantic Ocean.