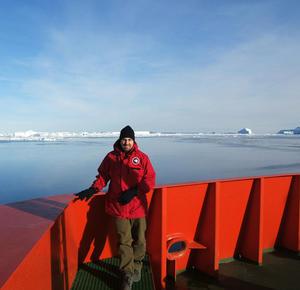 Researchers have found that a fall in atmospheric carbon dioxide (CO2) levels was a critical condition for global cooling and polar glaciation around 34 million years ago.

The research team, which includes the University of Southampton’s Dr Steven Bohaty, who is based at the National Oceanography Centre, determined past CO2 levels using geochemical markers preserved in marine drill cores and found that CO2 declined both immediately prior to and during Antarctic glaciation. This indicates that a substantial CO2 decrease was the primary agent forcing glacial expansion.

In a paper entitled ‘The Role of Carbon Dioxide during the Onset of Antarctic Glaciation,’ published in Science this month, the team concludes that the available evidence supports a fall in CO2 as a critical condition for initiating high-latitude cooling and glaciation about 34 million years ago.

Dr Bohaty says “The research is focused on the reconstruction of changes in atmospheric CO2 levels across the transition from the Eocene to Oligocene geological epochs, which was characterised by a major climatic shift. A decrease in CO2 is observed in conjunction with cooling of global climate and development of large Antarctic ice sheets during this transition.

“This study provides a better understanding of the relationship between climate and CO2 variation in the distant past – and evidence for CO2 being an important driver of ancient climate change.”

Improved knowledge of the timing and magnitude of CO2 changes enabled by research in this area will ultimately help identify the Earth system processes that led to major climate changes observed in the geological record, and can contribute to a better understanding of current and future climate change.