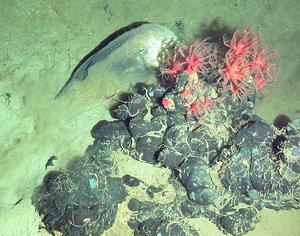 More than two thousand mounds of asphalt harbouring a wealth of deep-water creatures have been discovered up to two kilometres deep, off the coast of Angola.

In a study published in the journal Deep-Sea Research 1, scientists at the National Oceanography Centre (NOC) have been examining the images and data captured at the site to build an intriguing picture of the life and geology of this underwater area.

The naturally-occurring asphalt mounds are made up of the same substance that covers our roads. They range in size from single football-sized blobs to small hills several hundred metres across. It is the first time that these seabed asphalt mounds have been found on this side of the Atlantic – until now these features had only been seen in the Gulf of Mexico and off the coast of California. These deep-sea ‘slow tar volcanoes’ are associated with flows of oil from within the sediment and are formed from hydrocarbons migrating around subsurface salt structures. 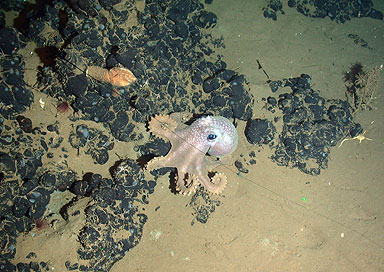 Researchers have also discovered that the vast array of mounds is home to at least 21 types of deep-water creatures, including large sponges, soft-corals, octopus and fish. Many more common deep-water animals, such as the blobfish and sea cucumbers also live near the mounds. This is a greater number of species than had previously been thought and important information for scientists when predicting biodiversity levels in similar areas of ocean.

The distinct mounds of asphalt were discovered by the oil company BP, who were carrying out exploration for oil reserves off Angola. Their initial surveys of the seafloor of these areas of huge oil reserves revealed some unusual surface features, which were subsequently investigated using underwater robots. In the area of seabed investigated, which was around the size of the Isle of Wight, a total of 2254 mounds were identified by side-scan sonar, covering a total area of 3.7 square kilometres of seafloor, about the area of a small town. 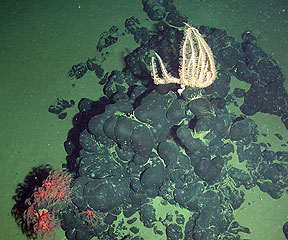 BP technical experts subsequently sent the deep-sea images to scientists in Southampton as part of a long-running collaboration between the oil industry and marine scientists at NOC.

Lead author of the study, Daniel Jones from NOC, said “This exciting discovery was a great example of collaboration between oil companies and marine scientists. By working together as a team, we used the industrial data and expertise to get a much better understanding of these important systems, which will be of great value both to the scientists, but also to the BP environmental management teams.”

The scientific study entitled Asphalt mounds and associated biota on the Angolan margin was jointly authored by NOC, BP and their subcontractor, Fugro. The data for the paper were provided by BP Exploration (Angola) Limited as the operator of block 31 and associated partners.

It is the first time that asphalt mounds have been studied in such detail and the study’s findings will help with future predictions of seabed patterns, rock types and habitat in similar areas of ocean. 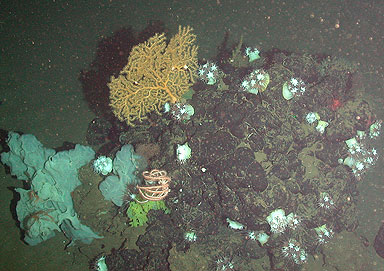