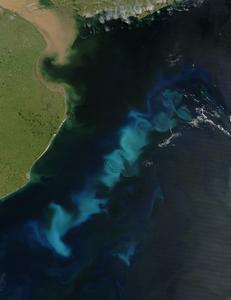 The supply of dissolved iron to oceans around continental shelves has been found to be more variable by region than previously believed – with implications for future climate prediction.

Iron is key to the removal of carbon dioxide from the Earth’s atmosphere as it promotes the growth of microscopic marine plants (phytoplankton), which mop up the greenhouse gas and lock it away in the ocean.

A new study, led by researchers based at the National Oceanography Centre Southampton, has found that the amount of dissolved iron released into the ocean from continental margins displays variability not currently captured by ocean-climate prediction models. This could alter predictions of future climate change because iron, a key micronutrient, plays an important role in the global carbon cycle.

Previously assumed to reflect rates of microbial activity, the study found that the amount of iron leaking from continental margins (the seafloor sediments close to continents) is actually far more varied between regions because of local differences in weathering and erosion on land. The results of the study are published this week in Nature Communications.

“Iron acts like a giant lever on marine life storing carbon,” says Dr Will Homoky, lead author and postdoctoral research fellow at University of Southampton Ocean and Earth Science, which is based at the Centre. “It switches on growth of microscopic marine plants, which extract carbon dioxide from our atmosphere and lock it away in the ocean.”

Continental margins are a major source of dissolved iron to the oceans and therefore an important factor for climate prediction models. But until now, measurements have only been taken in a limited number of regions across the globe, all of which have been characterised by low oxygen levels and high sedimentation rates. The present study focused on a region with contrasting environmental conditions – in Atlantic waters off the coast of South Africa.

“We were keen to measure iron from this region because it is so different to areas studied before. The seawater here contains more oxygen, and sediments accumulate much more slowly on the seafloor because the region is drier and geologically less active,” says Professor Rachel Mills, co-author at the University of Southampton.

The team found substantially smaller amounts of iron being supplied to seawater than measured anywhere before – challenging preconceptions of iron supply across the globe.

The researchers also identified that there are two different mechanisms by which rocks are dissolving on the seafloor. They did this by measuring the isotopic composition of the iron, using a technique developed with co-authors based at the University of South Carolina.

“We already knew that microbial processes dissolve iron in rocks and minerals,” says Dr Homoky, “but now we find that rocks also dissolve passively and release iron to seawater. A bit like sugar dissolving in a cup of tea.

“The fact that we have found a new mechanism makes us question how much iron is leaking out from other areas of the ocean floor. If certain rocks are going to dissolve irrespective of microbial processes, suddenly there are whole regions that might be supplying iron that are presently unaccounted for.”

But how much can this one factor really affect changes in the Earth’s climate? Dr Homoky explains “Model simulations indicate that the presence or absence of iron supply from continental margins may be enough to drive Earth’s transition between glacial and interglacial periods,” he says. “Therefore these findings could certainly have implications for global climate modelling – to what extent, is yet to be determined.

“Our study shows that the amount of iron coming off different margins might vary by up to ten thousand times. In some regions we are probably overestimating – and in others underestimating – the influence of sedimentary iron supply on the ocean’s carbon cycle. The goal now is to refine this knowledge to improve ocean-climate models.”

The study formed part of the international GEOTRACES programme (www.geotraces.org). The UK contribution was funded by the UK’s Natural Environment Research Council (NERC), including the two UK-led research expeditions across the Atlantic Ocean.