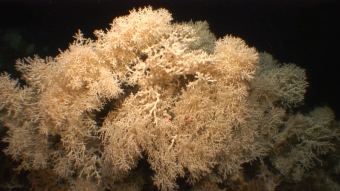 A new study from the Institut de Ciències del Mar (ICM-CSIC, Spain) and the National Oceanography Centre brings unprecedented insights into the environmental constraints and climatic events that controlled the formation of these reefs.

The results of this research will help understand how cold-water coral reefs can react to the effects caused by the present-day climate change.

Similar to tropical coral reefs, cold-water coral reefs are incredible hotspots of biodiversity, with the difference that they do not rely on symbiosis with microscopic algae, and therefore can be found in the dark and deep waters of our oceans. Despite their uniqueness and key functional role in the ocean, they are still partially unknown ecosystems, which still lack of thorough procedures to protect them from human-derived disturbances. In fact, they are considered vulnerable marine ecosystems by the United Nations, the OSPAR Commission and the General Fisheries Commission for the Mediterranean.

Now, an international team of scientists from the Institut de Ciències del Mar (ICM-CSIC) and the NOC has studied for the first time the main drivers that control the development of cold-water reefs in the Western Mediterranean during the last 400,000 years. In these reefs, the deeper you go, the older the corals will be, since new generations grow on top of the previous ones. The results of this research are collected in a paper published recently in the journal Quaternary Science Reviews and bring unprecedented insights into the environmental constraints and climatic events that controlled the cyclic development of these reefs.

To carry out the study, researchers made use of Laser Ablation U-series dating, a new technique consisting of ablating and ionising samples with an inductively coupled plasma mass spectrometer to determine the age of 110 cold-water coral skeletons. Combined with other analyses, these allowed them to describe when the main periods of reef formation occurred and which were the main environmental drivers of coral reef formation in this region.

According to this work, cold-water corals have been growing almost continuously in the Mediterranean for the last 400,000 years, even before the appearance of the first Neanderthals. Nonetheless, they might have started to form much earlier, as only the shallower part (10 m) of the entire reef height (80–90 m) could be described in this study.

The analyses of the semi-fossil corals acquired showed that coral growth and reef formation was affected by major changes in climate over this time period. “Climate swings associated with ice ages, such as changes in sea surface productivity and sea-level variations appear to be the main factors controlling the development of these cold-water coral reefs”, explains Guillem Corbera, PhD student from the NOC and the University of Southampton.

“In addition, intense and prolonged monsoon events that mainly affected the Eastern Mediterranean Sea had a detrimental impact for the development of these reefs, located 1000s of kilometers away in the Westernmost Mediterranean”, adds Corbera.

“Throughout the last 400,000 years, depending on the climate conditions, different species of corals dominated these reefs, which created impressive geo-forms in the deep ocean. This research helps us understand how cold-water coral reefs can react to the effects caused by the present-day climate change”, states the ICM-CSIC researcher Claudio Lo Iacono, who discovered these reefs some years ago and has now led this study.

This work was funded by the Graduate School of the National Oceanography Centre (GSNOCS), with the collaboration of ICM-CSIC, the NGO Oceana and by the EuroFLEETS GATEWAY project. Finally, the research involved collaboration with the German research Institutes MARUM and GEOMAR, the University of Barcelona and Ghent University.

The cold-water coral skeletal material used as part of this study forms part of the BOSCORF collection. This sediment core material and other deep sea sediment samples are available through this open access repository at BOSCORF using the repository holdings page.